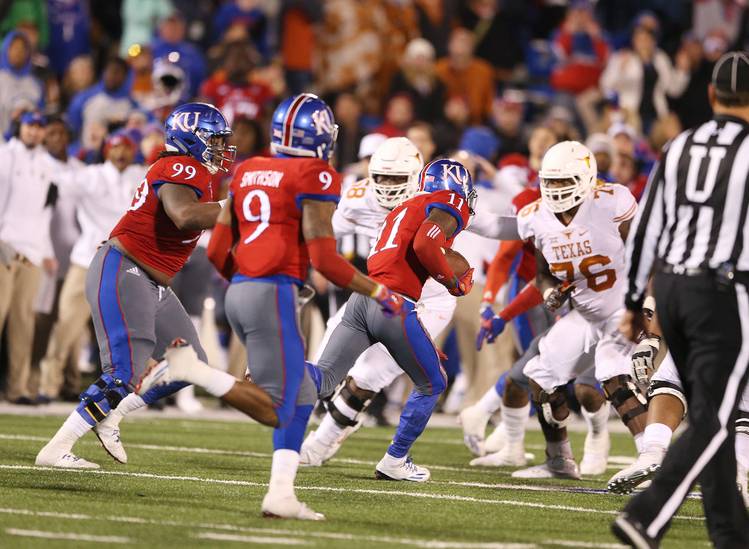 In retrospect, that day last November started like any other. Probably just like it will Saturday at Royal-Memorial Stadium.

It was a crisp, clear fall afternoon in Lawrence, Kan. Texas was supposed to show up and whip little ol’ Kansas, a 1-9 team with a fan base ready for basketball season. And that’s how it started. On the first play from scrimmage, Texas receiver Jacorey Warrick caught a quick pass, shook off a tackler and went 75 yards. The Horns led 7-0 just 11 seconds in.

“I actually remember that play, and my reaction was, ‘Oh my goodness. We’re gonna put up a lot on these guys if we’re scoring like that,’” receiver Collin Johnson said.

Linebacker Naashon Hughes recalled he “definitely thought we were going to win the game.”

“We’re gonna beat these guys, go back to Austin and celebrate our victory in the Big 12,” Hughes said.

Texas fans know the rest of this tragic story, as witnessed by the 25,673 fans that day. The Jayhawks, 24-point underdogs, forced six turnovers and roared back from an 11-point deficit to win 24-21 in overtime.

It’s an eerily similar situation almost one year later. The Longhorns (4-5, 3-3 Big 12) are 33-point favorites this time to the lowly Jayhawks (1-8, 0-6). If Texas somehow loses this time, its bowl chances become borderline microscopic.

Texas coach Tom Herman famously said he didn’t watch any film from last season. Why he wouldn’t watch the game that essentially got Charlie Strong fired is anyone’s guess. And let’s be clear, Strong would still be the coach had Texas beaten Kansas, multiple UT insiders believed then and now.

UT President Gregory L. Fenves was desperate to keep Strong. Losing to Kansas is indefensible, though. A season-ending loss to TCU the following week made the decision even easier. That paved the way for Herman’s arrival.

But defensive coordinator Todd Orlando had no issues watching that 2016 tape and force-feeding it back to the players.

“It’s not like they’re coming into this game like, ‘We can’t beat them.’ They already beat us,” Orlando said. “They beat us with the same guys. If you’re one of our kids and you go out there thinking that you’re just going to roll your helmet out there and that, ‘We’re Texas,’ and we’re just going to beat you, then you’re ridiculous.”

There’s no way these Longhorns take this opponent lightly, is there? Texas has lost back-to-back games in the Kansas series once before — in 1901 and 1938. When the Jayhawks joined the Big 12, the Horns won 13 straight until last year.

Herman likely has the same thought Strong did. No way the Horns lose, right?

Herman said Texas will start quarterback Shane Buechele in a bid for continuity. Freshman Sam Ehlinger has been cleared to play, but he was also cleared last week. Ehlinger didn’t play against TCU only because of a late-week setback due to an inner ear issue.

Buechele didn’t show Kansas his best last season, either. He completed only 17 of 26 passes for one touchdown and threw three interceptions. He had 165 yards and got sacked three times. In that game, coaches ran D’Onta Foreman into the ground, practically. The former UT running back had a school-record 51 carries for 250 rushing yards in the loss.

It’s unlikely this year’s crop of Texas running backs can come anywhere close to those numbers. This year’s offensive line isn’t remotely close to the same group, either. Guard Patrick Vahe is the only returning starter from that game.

Offensive coordinator Tim Beck, who has Herman’s full support, looked exasperated at times this week. Multiple times this season, Beck said players come back to the sideline after botched plays. The coaches ask what happened, and players respond, “I don’t know,” Beck said.

Think about how crippling that can be when coaches can’t understand what players are thinking at times. It’s a far different scene on defense. Last week, Orlando said linebacker Malik Jefferson shouted out, “Give me the board” on the sideline and drew up exactly what the opposition was doing.

The Texas defense must forge ahead without cornerback Holton Hill, who was suspended for the rest of the season for an undisclosed violation of team rules. It’s now unclear whether Hill will return for his senior season or jump into the NFL draft.

Herman and Orlando said junior Davante Davis and freshman Josh Thompson have both rotated at Hill’s position. Both will likely play against Kansas. “They’ve been practicing hard all year, so they’ve been ready for moments like this,” Jefferson said.

Texas may also unveil a new kicker this week. Herman said Mitchell Becker got a long look at practice this week. Joshua Rowland is 7 for 14 on field goal attempts.

Even on UT’s worst day, a program of this size and statue should be able to beat Kansas. This game should be relatively easy, right?

“We just want to get better every week and show that we are improving,” receiver Lil’Jordan Humphrey said, “that is all we want to do.”