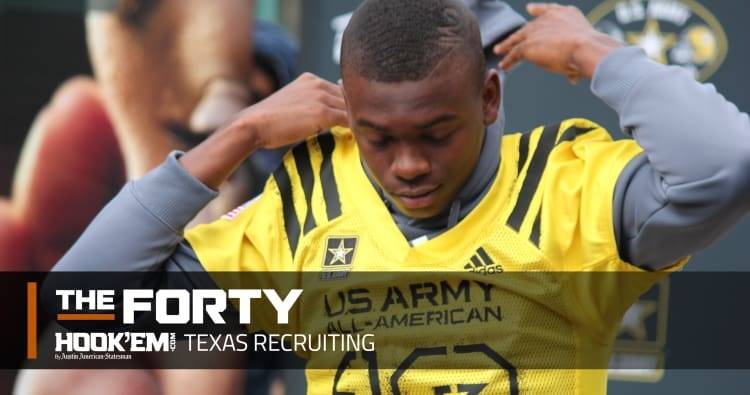 The decision looms for Anthony Cook

The No. 4 player on the Fabulous 55 knows he’ll sign with his school of choice on the first national signing day available to the 2018 class, on Dec. 20. But Houston Lamar 5-star cornerback Anthony Cook just doesn’t exactly know which school he’ll choose.

“Within the next week, I’ll be making a decision,” Cook said Thursday morning after accepting his jersey for the U.S. Army All-American Game in San Antonio on Jan. 6. “It has to be soon.”

It’s safe to say most uncommitted prospects have an idea of their future destination by now. Cook seems legitimately torn. Time is running out and the teenager must decide where he’ll spend the next three to five years.

“I just know I’ve got to make a decision. It’s tough,” he said. “I feel like at this point, they all have pros and cons, so it’s going to come down to where I can see myself playing the next three to four years.”

Cook is the nation’s No. 2-ranked cornerback and the top-rated player in Texas, per 247Sports’ composite. The 6-foot, 170-pound 5-star competed at The Opening over the summer with Lamar teammates and UT commits Al’vonte Woodard and D’Shawn Jamison.

It’s safe to say the two are helping Texas recruit Cook to Austin.

“We talk to him about it every chance we get,” Woodard said. “I always throw him the Hook’em sign and all that. It’s his decision, though, and he knows we’re going to support what he does.”

Recruiting is a courtship between a prospect and a program. Cover recruiting long enough and it feels like writing about relationships as much as football. Cook, who has more than 30 offers, doesn’t lack options. Houston Lamar is known as DB High because of its penchant for producing secondary talent like current Longhorns Holton Hill and John Bonney.

Texas is continuing that tradition with Jamison, a 4-star nickel cornerback who committed to Texas on the same day the Longhorns fell to Oklahoma. Woodard, a 4-star wide receiver, joined Texas’ class in August. Tom Herman and his staff are leaning on state pride and the future to reel in Cook.

“Coach Herman says to come play for your state, come be a part of something different,” Cook said. “He’s a new coach coming in and I could come in and possibly help get a national championship.”

LSU is the main threat to Texas. Head coach Ed Orgeron recently called Cook to drive home the fact that the Tigers’ depth chart at cornerback is thin moving into the 2018 season.

“They’ve shown me the depth chart and told me facts about how they put my position into the NFL,” Cook said. “(Coach O) was just saying that I could come in and play right away and that he understands that Texas is the in-state school, but LSU is the best place for me.”

Ohio State is pointing to the amount of snaps that true freshman, and Texas native, Jeffrey Okudah has played for the Buckeyes this season.

“They want me to know young guys do play at Ohio State,” Cook said.

The making of a secondary

It is yet to be determined if Herman will improve on the success of the previous season. It’s already known his 2018 class will be better than his first as Texas’ head coach. The 2018 recruiting cycle is Herman’s first full cycle as the head coach and the Longhorns’ class ranks No. 2 in the nation.

A big reason why is the secondary. The Longhorns hold commitments from 4-star cornerbacks Jalen Green and Jamison, and 5-star B.J. Foster and 4-stars Caden Sterns and DeMarvion Overshown make up the best trio of committed safeties in the country. All five were at The Opening Final in Oregon this summer.

Cook is the final piece of the puzzle. Landing him would give Texas the top six secondary players in the state for 2018. Talent is the only thing Cook would add to the class if he chose the Longhorns.

“He’s a hard-working kid. He puts in the amount of time needed to be an elite football player,” said Houston Lamar secondary coach Theadis Reagins. “He understands what it will take him to reach his goals and is willing to make that sacrifice.”