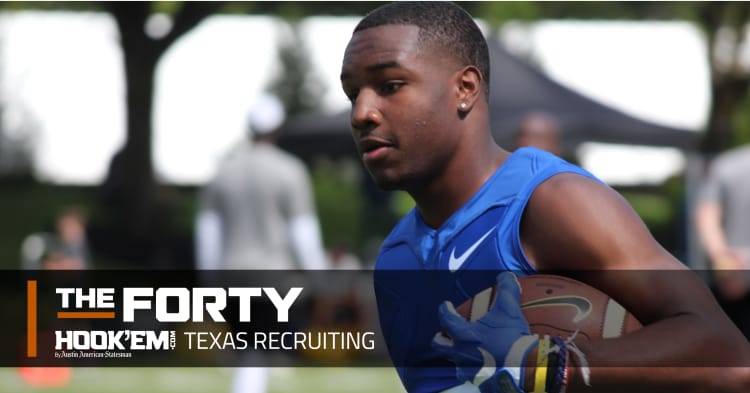 More than half of Texas’ 2018 recruiting class is expected to participate in a postseason all-star game. Brennan Eagles, a 4-star wide receiver out of Alief Taylor, added his name to that list Monday when he was officially awarded his U.S. Army All-American jersey at his school. The game is scheduled for Jan. 6 in San Antonio.

“I accomplished my goal of being an All-American, and that’s the main thing,” Eagles told USA Today. “I’m honored to be able to play in front of the U.S. Army.”

Brennan would like to thank his mother Kimberly for always standing by him. She was presented with the @amfam #DreamChampion award. #DreamFearlessly #ArmyBowl

The debate for top receiver in the state includes Eagles. The 6-3, 214-pound 4-star prospect is ranked No. 7 on the 2018 Fabulous 55. He’s the No. 31-ranked overall prospect in the country and the No. 6 wide receiver prospect in the entire class, per the 247Sports Composite.

Eagles’ recruiting stock soared as a junior and he chose the Longhorns on July 24 after receiving nearly 30 FBS offers. The Opening alumnus is one of three 4-star wider receivers committed to Texas and his coaches had to get creative to keep him engaged as a senior.

“I talked to him before the season about not being bored in practice,” said Alief Taylor receivers coach Tristan Randle. “It was about having a plan each day. Pick something to work on and perfect it. The reality was he wasn’t facing 4- and 5-star defensive backs in practice.”

Randle arrived at Alief Taylor to coach Eagles and his fellow receivers before the season. Eagles’ poise and maturity impressed him, as did Eagles’ blend of size, strength and pure speed. Eagles posted one of the top SPARQ scores in Texas during the offseason, a measurement used by The Opening to gauge prospects’ athletic ability.

“Most guys his size can’t move like he does in and out of breaks,” Randle said. “I think he’s going to be really good for Texas. He’s still growing and could end up as a 230-pound receiver who can already run a 4.4. That’s rare.”

“In our first scrimmage of the season, we face North Shore, and that’s a program full of athletes and is always in the playoffs,” Randle explained. “Eagles mauled the cornerback on the first play of the scrimmage on a run play and I knew he was an all-around wide receiver with the right mentality.”

Eagles plans to sign with Texas in the first period, which begins Dec. 20.

The Austin area is home to one of the top wide receivers in the state and one of the top overall 2019 prospects in the country. Garrett Wilson, a 4-star prospect from Lake Travis, is putting together a big junior year following a solid showing as a sophomore.

Wilson holds more than 15 offers and that list should grow as he enters the offseason. The 6-foot, 178-pound prospect can play outside or slot. He even lines up in the backfield at times.

“Moving around and playing more than one position isn’t as fun as you’d think,” Wilson said with a smile last Friday night after Lake Travis beat Vandegrift. “It’s a lot of added responsibility, but I get to be involved in the entire offense. It’s fun to be a playmaker in this offense because of how much we move around the football.”

Wilson leads the team with 58 catches for 1,155 yards and 19 touchdowns. He’s averaged nearly 20 yards per catch and records more than 115 yards per game as a receiver. Wilson averaged 4.9 yards on 12 carries and added more than 200 yards as a returner.

“I’ve become an all-around wide receiver. I can play multiple positions now,” he said. “The next step is refining my technique and making more big plays with the ball in my hands.”

Wilson visited Texas for the Maryland game and said he hears from the Texas staff about twice a month, which isn’t a lot compared to programs like TCU and Oregon. If the Longhorns do extend a scholarship offer to him, Texas will have an advantage.

“Proximity to home will be a big thing for me in my recruitment,” he said. “That and how I feel about the coaches and the atmosphere with the players. I also want to play early. I love football so much and can’t imagine missing out on it for a year.”