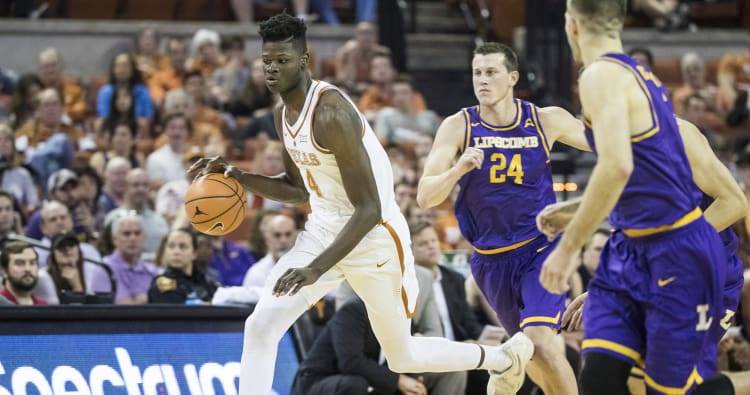 On days when the Texas Longhorns struggle to make jump shots, they can try to lean on their budding superstar and an athletic, opportunistic defense.

Mohamed Bamba produced 13 points, 10 rebounds and five blocks as the Longhorns defeated Lipscomb 80-57 Saturday in front of 8,592 at the Erwin Center.

The 6-foot-11, long-armed Bamba accomplished that while playing only 19 minutes because of foul trouble.

Mathews went scoreless in the first half, playing only five minutes because he picked up three fouls. He played 22 minutes overall.

Alexander believed he had to put Mathews back in the game with two fouls.

“We couldn’t score,” the coach said.

Mathews hit 4 of 11 from the field, including 1 of 5 3-pointers, while guarded primarily by Roach. Mathews had made 9 of 18 3-pointers before facing Texas.

“Snoop won’t say this, but he really stepped up big defensively,” Bamba said. “He completely took out one of the nation’s leading scorers.”

“Snoop has really bought into the process,” Smart said. “I think Snoop did a great job.”

But the Longhorns made two treys early in the second half, by Bamba and Jase Febres, helping them extend their lead to 23.

“It was definitely their defense,” Alexander said. “They didn’t give us anything.”

One reason Texas can force opponents off the 3-point line is that Bamba, with his 7-foot-9 wingspan, awaits them near the basket when they drive.

One time when the Longhorns did get beat on a drive, 6-foot-9 Eli Pepper made a driving dunk on Bamba. Pepper taunted the Longhorns, receiving a technical foul.

“I told Eli Pepper in the line after the game, I would have talked trash,” Smart said. “That was impressive.”

Smart has 11 scholarship players who are eligible this season, all of them averaging more than 10 minutes a game. Smart suggested recently that he has considered shrinking the rotation but must keep everybody engaged.

“They are all guys we feel can help us at different times,” Smart said. “We are going to need them at different times. So you don’t want to let guys get buried on the bench because, No. 1, they are talented young guys who can grow and improve and develop. And No. 2, they can help the team if given the opportunity in certain situations. So you just have to strike that balance.”

Sure enough, the Longhorns lost Bamba for one game with a concussion. Texas has also incurred foul trouble at times.

“My natural inclination is to try to build depth,” Smart said. “But you are not going to be able to every game play 11 guys double-figure minutes. Obviously, the competition is going way up (starting with Butler on Thanksgiving), so I’d say the minutes won’t be as evenly distributed.”

Texas 28, West Virginia 14: Longhorns are back in the bowl business after road win

Now 6-5, Texas projected to square off with Mississippi State in Texas Bowl