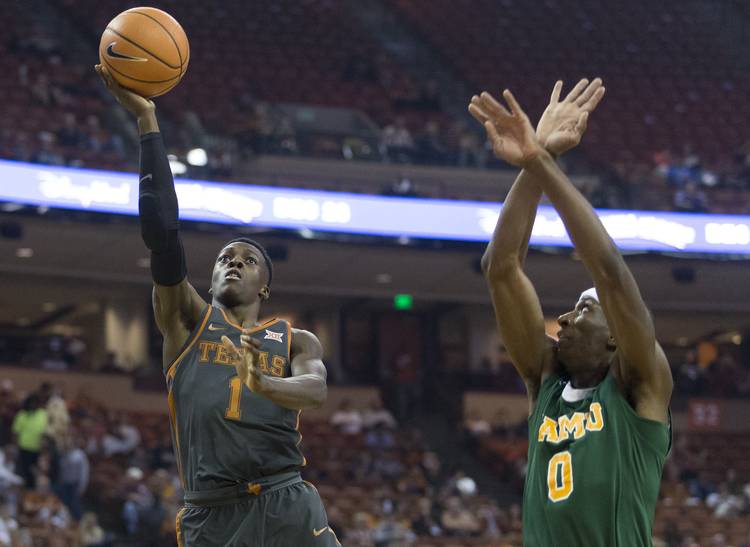 Forty years to the day Johnny Moore scored the first basket inside the Erwin Center, the former Texas guard still has fond memories of his time with the Longhorns.

“Every time we went out there, we were undersized, out-manned and more talent on the other team,” said Moore, UT’s all-time leader in assists. “But we’re winners.”

Moore and the rest of the 1977-78 Longhorns were honored at halftime Wednesday of UT’s scrum with Florida A&M. That group went undefeated at home as Texas won 25 straight at the Drum over two seasons.

This year’s team is a perfect 4-0 inside the 40-year-old arena so far after an 82-58 win over the Rattlers, one of the lowest scoring teams in Division I.

It’s easy to get yourself pumped up for games against top-ranked Duke. But that means Texas (5-2) has to be ready against teams like 1-8 Florida A&M, too.

Asked why his players seemed down afterward, UT coach Shaka Smart said, “That’s ’cause I jumped their ass in the locker room. Oh, they listened.”

Smart admitted the players had a long road trip to Portland, Ore., and played three tough games. Then, the team came back to Austin and went straight to work to get ready for Florida A&M. Still, Smart acted as if its inexcusable the Horns could make only four of 19 3-pointers and just 10 of 23 from the free-throw line.

“It’s human nature,” Smart said. “It’s something we’ve got to teach these guys to battle. Yeah, we can win not quite being at our best. Uh-uh. We’ve got to be our best. That’s really what winning guys and winning teams learn to do.”

That was the entirety of the post-game message, which left Smart hoarse.

“If we’re going to compete against teams like Duke and Gonzaga, top-10 or top whatever teams that they are, then we need to have our standard at a lot higher level,” a solemn-sounding Dylan Osetkowski said.

“Nothing against Florida A&M,” the junior added. “I thought they played very well, knocked some shots down. But it’s about us. It’s not about the other team. We’ve got to be at a better level at everything for the next game and all future games.”

It’s clear the Portland trip — and overtime losses to Duke and Gonzaga — is still on the Longhorns’ minds. Perhaps that molds how they perform in December.

“We lost two tough ones in overtime that we felt we should have won,” guard Andrew Jones said. “We should be dominant every night, no matter who we’re playing.”

Osetkowski looked dominant against the Rattlers. He had two steals in the first few minutes as the Horns opened in the full-court press. He finished with a game-high 19 points on 8 of 11 shooting and eight rebounds in 21 full minutes.

“Dylan was a space cadet at times,” Smart said.

The junior shouldn’t expect any bouquets from the coach all season long, really. Remember, Smart is the one who personally worked with Osetkowski in one-on-one workouts last year as the 6-foot-9 big man sat out after transferring from Tulane. If anybody knows how good Osetkowski can be, it’s Smart.

“I’m hard on him,” Smart said. “He’s further along in terms of his maturity and development. You can tell him the truth. You can really give it to him straight.”

For most of the game, Osetkowski was the only player getting it done offensively. Andrew Jones (14 points), Kerwin Roach Jr. (11) and Mo Bamba (10) moved into double figures midway through the second half as FAMU wore down.

Guard Matt Coleman had three assists, a number that should have been higher. He threw the ball up high to Bamba and Jericho Sims, forcing them to go get it for alley-oop attempts. Bamba made only four shots and missed a couple of tip-in possibilities. Sims had seven points on 2 of 4 shooting.

Texas’ inconsistent shooting has to be maddening for the coaching staff. The Horns missed 11 of their final 12 shots of the first half. Then, they made six in a row after the break and later hit eight of nine during one stretch. Going inside, driving for layups and dunks sure helped.

Texas shot 42 percent in the first half and a whopping 75 percent in the second half, for the fifth-best shooting performance in a half in recorded history. UT’s shooting statistics go back to the 1965-66 season.

Ho-hum victories are still victories, nonetheless. Texas will take this one and keep moving forward.

“It’s early on in the season, not an excuse, but we’ve got a long way to go to get where we want to get,” Osetkowski said. “We’ve got to be at a high level on Friday when we come back to practice.”