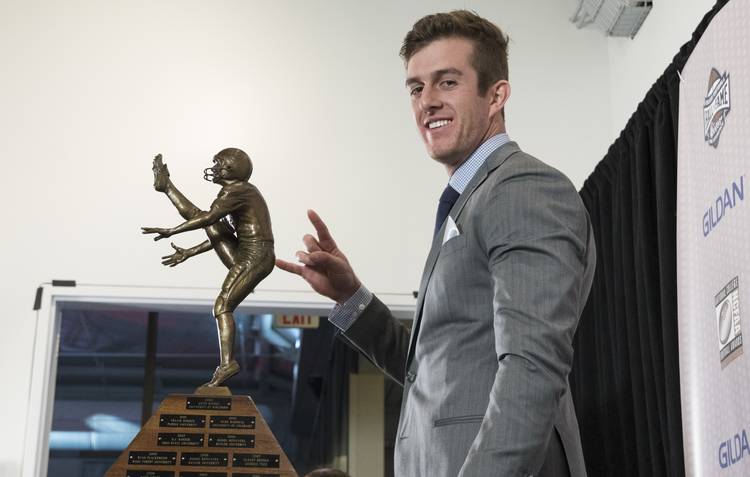 ATLANTA — The best hitters can feel the ball jump off the bat. Golfers know immediately when a shot feels good, too. Same goes for Australian-born Michael Dickson, now the best punter in Texas football history.

“You know it when you feel it,” said Dickson, who sent a 76-yard rocket into the sky against TCU. “But then like looking up, it’s the best feeling I get seeing it take off.”

Dickson gave the boot to every other punter in college football on Thursday and captured the Ray Guy Award. It’s the first time any player from Texas was honored as the nation’s best punter.

Alabama’s JK Scott and Utah’s Mitch Wishnowsky were also in Atlanta as Ray Guy finalists at the College Football Hall of Fame.

Dickson is facing a fascinating decision — should the junior finance major return for his senior season or go pro. There are 21 punters in the NFL now currently making $1 million or more. Kansas City’s Dustin Colquitt pulls in $3.75 million, according to Spotrac.

After 215 attempts, Dickson holds the school record with a 45.5 yard average. That tops the previous mark held by Russell Erxleben, who averaged 44.2 yards from 1975-78.

He’s come a long way since an auspicious debut as a nervous freshman. Dickson’s first punt at practice was shanked so hard, it went flying out of Denius Fields and landed on Red River Street.

Dickson averaged 41.3 yards per attempt as a freshman, 47.4 as a sophomore and now a career-high this season. Over his career, Dickson has 76 punts go 50 yards or more. His speciality this season has been the pooch punt that UT’s gunners have caught inside the 5-yard line on the fly.

“I kind of realized this when I was telling all the other specialists what I do on gameday,” Dickson said. “The details really matter. In the offseason, you need to get this amount of kicks in each day, you need to do this with your legs.

“During the season, I have set routine every day that I’m always thinking about,” he added. “On gameday, I need to do these things. The details do matter. The details, once done, can make you feel confident and when you’re out there, you can relax. I just feel like I’m very specific in what I do and detail-oriented. That makes me happy.”

Dickson will play in the Texas Bowl against Missouri, but as for what happens afterward, he’s not sure just yet. The Longhorns would be happy to have him back.