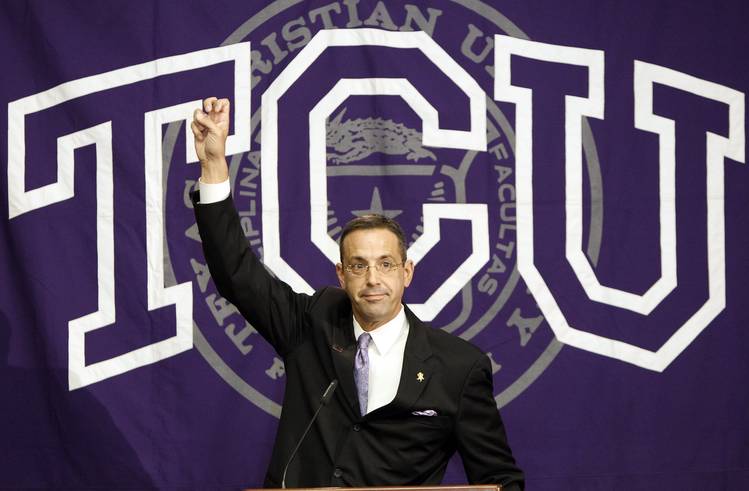 FORT WORTH, TX - OCTOBER 10: Texas Christian University Athletic Director Chris Del Conte flashes the 'Horned Frogs" during a press conference in which TCU accepted an invention to join the Big XII conference on October 10, 2011 in Fort Worth, Texas. (Photo by Brandon Wade/Getty Images)

Perhaps sensing the Longhorns’ fan base needed a jolt, University of Texas President Gregory L. Fenves pulled off a stunning move by luring one of the best college athletic administrators in the business to Austin.

Fenves reached an agreement with TCU athletic director Chris Del Conte to become the new vice president for intercollegiate athletics at UT, two sources told the American-Statesman on Saturday. Both men confirmed the news on Twitter.

In a campuswide email, Fenves said the UT athletic department must be led by “a strategic, forward-thinking leader.” The former track athlete from the University of California, Santa Barbara was the athletic director at Rice (2006-09) before spending the past eight years at TCU.

Del Conte, 49, will have final oversight of men’s and women’s athletics at Texas. Current women’s athletic director Chris Plonsky will report to Del Conte, two sources said. Plonksy, who is traveling with the volleyball team on the West Coast, could not be reached.

Del Conte will replace men’s athletic director Mike Perrin, who was hired in September 2015 after Steve Patterson’s rocky 22-month tenure. The school had already announced that Perrin’s time as AD would end in August 2018.

Del Conte will be officially introduced at a news conference Monday, the school said.

“I felt it was the ultimate opportunity, the challenge of the job and the legacy of the organization at the University of Texas and what it can be,” Del Conte said in an interview. “I was so impressed with President Fenves and his vision of what Texas is and can be.”

Fenves has gotten to know Del Conte through various Big 12 events over the years. But the two men didn’t talk seriously about the position until meeting at the National Football Foundation awards dinner in New York this week. Del Conte accepted the job a few days later, a source said.

“You will see him at the Texas Bowl in a couple of weeks and at competitions involving all Longhorns teams very soon,” Fenves said in his email. “I am excited to welcome Chris to Texas as he writes a new chapter in Longhorns history.”

Del Conte has agreed to a seven-year contract worth approximately $1.3 million annually. Any contract must be approved by the UT System Board of Regents. According to USA Today’s salary database, Del Conte earned just under $700,000 at TCU, a private school that does not release salary data.

On Del Conte’s watch, TCU has grown into a Big 12 powerhouse, one that’s enjoyed record-breaking donations in three of the past four years. Del Conte oversaw $200 million in football and basketball facility expansions, all while accumulating no debt.

Without Del Conte, the Horned Frogs might not even be in the Big 12. He famously drove to Austin one October day in 2011 along with fellow TCU staffer Jeremiah Donati. Together, they waited outside UT men’s athletic director DeLoss Dodds’ office, just hoping for a few minutes with the legendary power broker.

The two men brought binders, charts and all sorts of data to show why TCU belonged in the Big 12.

“He tells that story better than I do,” Dodds said Saturday. “He makes it better than it really was. He did call; he did come down; we did go to the Headliners Club. We did talk for two or three hours. I wasn’t in a position to commit to anything. I was one vote out of however many.

“Chris and I have been friends since he has been at TCU,” Dodds added. “I think highly of him, and he’ll do a great job.”

Whatever happened, it worked. TCU was admitted into the league. The Frogs, mere fodder for the Longhorns during their Southwest Conference days, now have a four-game winning streak over the Horns in the football series.

TCU coach Gary Patterson said Del Conte is a great friend. “All you can ask anyone to do is leave a place better than it was when they got there, and Chris made a huge difference at TCU!” Patterson said.

Said Del Conte, “I thought if it ever came a time to leave, I’d ask myself if I did everything possible to make TCU better, and I think I have.”

Del Conte’s hiring comes at a pivotal time for UT sports. The football team just finished a disappointing 6-6 season under first-year coach Tom Herman. However, the Horns are expected to sign perhaps the nation’s No. 1 recruiting class Dec. 20. A win over Missouri (7-5) in the Texas Bowl would snap the program’s run of three straight losing seasons.

Men’s basketball is gathering steam, and the women’s basketball program is ranked second in the nation. UT’s volleyball team faced Stanford late Saturday for the right to advance to the NCAA national semifinals. Golf, tennis, track and field, and swimming are all strong, too.

Del Conte was at Rice at the same time current UT football coach Tom Herman and baseball coach David Pierce were there as assistants, so he’s already familiar with some Texas coaches.

“He’s a smart and creative leader who has a great passion for student-athletes and college sports,” Herman said in a statement. “On top of that, he’s an engaging, energetic and fun person to be around and work with. We’re definitely in good hands, and I’m looking forward to a bright future with Chris leading the way.”