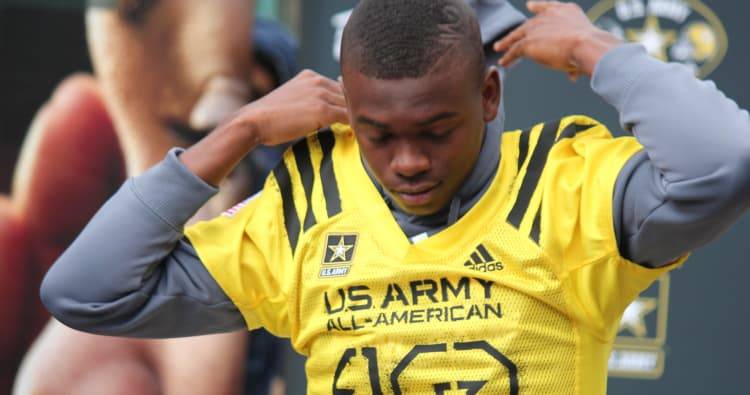 The crowned jewel of the 2018 recruiting class was Anthony Cook once Tom Herman and his staff locked in the other top players on the Fabulous 55 early in the cycle. A year after not signing a single top-10 prospect in the state, the Longhorns gained commitments from the best five players in the 2018 recruiting cycle.

Cook is the second 5-star prospect to declare for Texas, joining safety BJ Foster. Cook should fit right at home in Austin, as he’ll be joined by Houston Lamar teammates Al’vonte Woodard and D’Shawn Jamison in Texas’ 2018 recruiting class.

Skill set: Cook is a technician. While most elite cornerbacks win matchups due to sheer athleticism, Cook is a master of his craft at a young age. It garnered him more than 30 offers and made him the No. 1 player in the state, per 247Sports Composite. An alumnus of The Opening Final in Oregon, Cook will conclude his prep career by playing in the U.S. Army All-American Bowl.

Cook is 6-foot and strong enough to body receivers at the line of scrimmage. He’s a willing tackler in space and excels in man-to-man coverage. Cook chose the Longhorns over Ohio State and LSU. He was a first-team all-district selection at cornerback as a sophomore, junior and a senior.

Immediate impact: There is a hole to fill opposite of Kris Boyd at cornerback and Cook will get his chance to make an impact as a true freshman. His advanced understanding of the position should give him an advantage over the other young cornerbacks Texas must not rely on with the departure of Holton Hill.

Cook wants to play immediately and was almost swayed to attend LSU because a favorable depth chart. The 5-star wants to get on the field, and even if he doesn’t earn an out-right starting spot in 2018, expect him to get snaps throughout the season.

Fitting into the program: Houston Lamar is a pipeline program for Texas, tracing all the way back to Rod Babers and continuing through the current program. Cook is part of a trio of Houston Lamar products to sign with the Longhorns in the 2018 class.

Recruiting at the position: Cook’s commitment to Texas makes the Longhorns’ defensive back crop the best in the nation. Joining the likes of Cook, Woodard and Foster are Jalen Green and Caden Sterns, the top two-ranked players on the current Fabulous 55. The defensive staff scored an A+ recruiting the cornerback and safety position, locking in an elite trio at both position units.

Did Urban Meyer throw shade at Texas during his Signing Day press conference?