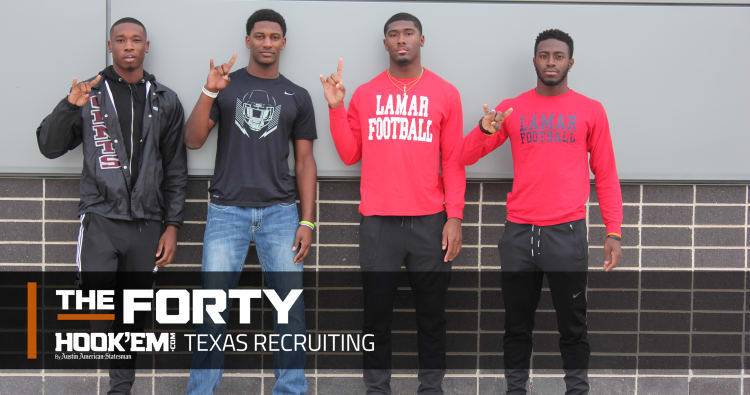 The plan was hatched 10 months ago when Tom Herman and the Longhorns staff hosted their first junior day at Texas. Among the dozens of attendees were an elite group of players from the Houston area. Houston is fond to Herman, who used the #HTownTakeover movement on social media as the head coach of the Houston Cougars to keep the best players in the city.

Now, he needed those same types of players to follow his path to Austin.

This plan was like the one Herman used to land 5-star defensive tackle Ed Oliver from Spring Westfield: Houston is ripe with talent and a program full of the best players from the area should compete at the highest levels. Appeal to their sense of family, city and state pride.

“Once I got to know coach Herman and coach (Jason) Washington more, I knew it was probably going to be the place for me,” said D’Shawn Jamison, the 4-star cornerback from Houston Lamar who signed with Texas on Wednesday morning. “I got the vibe that they’d take care of me and be real with you. We want to put Texas back on the map with him.”

All Herman needed was a ringleader, and 5-star safety prospect B.J. Foster rode in from Angleton to lead the charge.

“It was B.J.,” said Houston Heights cornerback Jalen Green when asked who was the first person to get in his ear about the Longhorns. “I wasn’t even at the junior day because I had something else to do, but when they all got back the buzz was Texas.”

Foster started a group text. He included Green, Houston Lamar receiver Al’vonte Woodard and Jamison. The four will sign with Texas on Wednesday and take advantage of the new early signing period. Other elite prospects were added and subtracted from the group texts along the path to this first national signing day.

“We made a group text and kept in contact with each other to stay on the same page,” Foster said. “I wanted to play with a group of guys that I know are going to ball. That’s what I did. I know these guys and what they’re about, so I trust what we can accomplish together.”

Seven of the Texas’ current 19 commits in the 2018 class hail from the Houston area. Tight end Malcolm Epps (Spring Dekaney) and wide receiver Brennan Eagles (Alief Taylor) are utilized the new early signing period and have become Longhorns. Keondre Coburn, a 4-star defensive tackle from Westfield, is waiting until February to sign.

Texas hopes to add an eighth Houston athlete Wednesday afternoon when Houston Lamar cornerback Anthony Cook chooses between the Longhorns, LSU and Ohio State. Woodard and Jamison, his high school teammates at Lamar, will take part in signing ceremonies with Texas at that time.

“It’d be a blessing to get to compete against both of those guys in practice and watch us continue to grow,” said Woodard, a 4-star wide receiver. “I already know I get to keep going up against Jamison in practice. If we could add another Houston Lamar cornerback, that would be a blessing.”

Texas’ class ranked second in the nation and first in the Big 12 entering signing day. Texas expects to sign most of the class during the three-day early signing period. A third of those players should reside in Houston and the bonds Herman built with those players while manning the Cougars’ football team are paying dividends.

Texas assistant coach Corby Meekins used to coach Coburn. Houston Lamar is a pipeline school to Texas that has produced defensive back talent for the Longhorns like Rod Babers and Holton Hill. Quentin Jammer and Quandre Diggs went to the same high school as Foster. Green first met Herman as a sophomore on an unofficial recruiting trip to Houston with his Houston Heights teammates.

“When he was at Houston he knew I wasn’t going to go there, but he took the time to talk to me and my parents about the recruiting process and what to look at for,” Jamison recalled. “He didn’t have to do that, but he did and it showed me a lot about him as a person and a coach.”

All seven of the Houston-area commits are ranked in the top 20 of the 2018 Fabulous 55. Foster, Green and Eagles are national top 50 players. Woodard, Jamison and Coburn rank inside of the top 115 of the same list. Epps ranks at No. 226 and all seven will take part in either the Under Armour All-American Game in Orlando on Jan. 4 or the U.S. Army All-American Bowl in San Antonio on Jan. 6.

Woodard and Jamison knew each from Houston Lamar. It was at regional camps like The Opening and the Under Armour All-American Series that solidified the relationship between the rest. For years, each offseason, the area’s best players would converge to compete against each other. It made each player better. It also built bonds.

“The camps were important. I’ve been friends with these guys for over two years, so the current relationship we have is already tight,” Jamison said. “I plan on doing everything and anything with these boys. There is nothing that could come between our relationship.”

The plan worked. Herman will land his prized crop, even after a 6-6 start to his tenure. Friendship overcomes.

I wasn’t sure it was where I was going, but as the recruiting process went on and we all liked Texas and were clicking as friends, it made sense to try and go to one school and play together,” Woodard said.