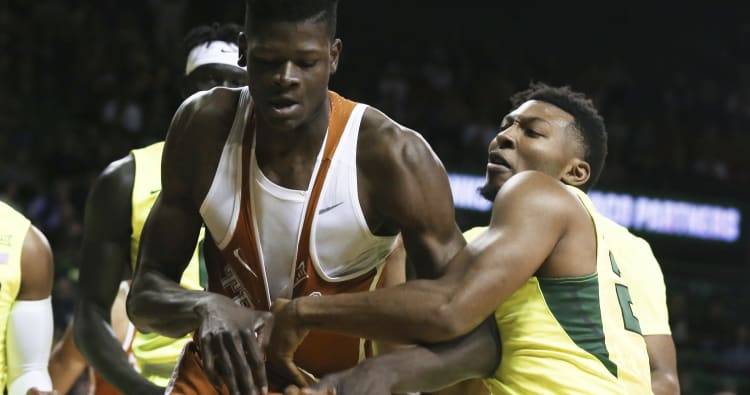 WACO — Texas guard Jase Febres was red-hot early, but the Longhorns needed more from everyone else in a tight game against Baylor.

The freshman poured in a season-high 18 points before halftime. But the Horns were ice cold to start the second half and wound up losing 69-60 at the Ferrell Center.

Texas simply couldn’t get anything going down the stretch. The Horns scored only one field goal in the final 5:03. Febres finished with 18 points while Mo Bamba added 15 more. No other Longhorn finished in double figures.

Baylor’s Mark Vital blocked a clutch shot into the stands with just over a minute remaining to send the home crowd into the stratosphere.

Prior to Saturday’s game, Febres’ season high was 13 points in the season opener against Northwestern State. He had not finished in double figures since. In fact, he scored only three points total in the last seven games — a lonely 3-pointer against Louisiana Tech.

But Febres was everywhere in the first half in his first career starting assignment. Playing in Andrew Jones’ spot, Febres had a dazzling 18 points and was 4 or 5 from beyond the arc before the break. He was 7 for 9 overall in the first half, too.

With several NBA scouts in the building, including one general manager, Mo Bamba played rather tentative in the first half. But he turned it on down the stretch. He hit a 3-pointer that got the Horns back within three. Then, he drew a charge on Baylor’s Jo Lual-Acuil, the Bears’ 7-foot big man from Australia.

The most important aspect of playing on the road is getting off to a good start. Texas had three turnovers on its first three possessions on Monday at Iowa State. Kerwin Roach Jr. started off with turnovers on the first two possessions against Baylor. Baylor jumped out to a quick 6-2 lead before Texas engaged. Febres hit back-to-back 3-pointers from opposite corners, and the Horns were back on top.

It happened again after halftime. The Horns were slow to start the second half. Eric Davis Jr. fed Mo Bamba on the break and the ball bounced out of bounds. Baylor took a four-point lead and seized momentum.

Coach Shaka Smart was right. For whatever reason, this team does shoot better on the road. One of the key reasons the Longhorns were 3-0 in their first three road games was their outside shooting. Texas shot 44.4 percent from beyond the arc in those three wins — at Virginia Commonwealth, Alabama and Iowa State.

The Horns were 6 for 13 from 3-point range in the first half against the Bears. Febres had most of those, but Osetkowski and Davis also hit from long range.

Wednesday’s home game against No. 16 TCU is must-see TV. In case you’re been caught totally unaware, the Horned Frogs have become serious Big 12 contenders under coach Jamie Dixon. TCU won the postseason NIT last season and had a 13-1 record before Saturday’s game against Kansas.

The post At the buzzer: Baylor 69, Texas 60 appeared first on Hook ‘Em.