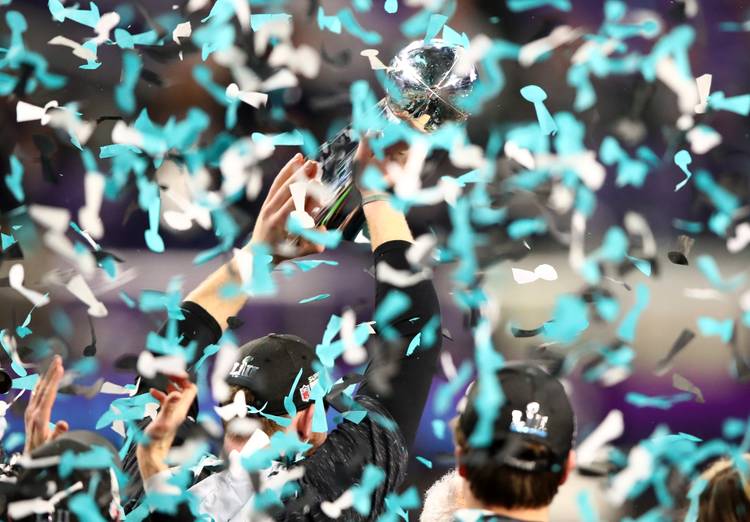 Nick Foles of the Philadelphia Eagles holds the Lombardi Trophy while celebrating a win over New England in Super Bowl LII at U.S. Bank Stadium on Feb. 4, 2018 in Minneapolis (Gregory Shamus/Getty Images)

Linebacker Jordan Hicks and receiver Marcus Johnson became the 25th and 26th Longhorns to win a Super Bowl on Sunday. Hicks and Johnson’s Philadelphia Eagles recorded a 41-33 win over New England in Super Bowl LII, which was played in Minneapolis.

Rookie year I got cut, was at home for 2 months, then brought back all with the Eagles. 2nd year in the League I made the roster & now a SUPER BOWL CHAMPION🏆🦅 KEEP GRINDIN BOY YOUR LIFE CAN CHANGE IN ONE YEAR📢💯

Through the ups and downs, God’s glory shines bright! Undeniably the most special team I’ve ever been apart of! @ivanakaryhn #flyeaglesfly #superbowl52 #champ

Neither Johnson or Hicks played in the Super Bowl. Johnson was listed among Philadelphia’s inactive players before the game. Hicks had his season ended by an Achilles injury in October.

Hicks and Johnson were teammates at Texas from 2012-14. Hicks, who was Philadelphia’s third round pick in 2015, has accounted for 163 tackles and seven interceptions in his career. Johnson joined the Eagles as an undrafted free agent in 2016, and he recorded five catches this season.

Here is a list of the Longhorns’ Super Bowl champions. Terry Orr, Dan Neil, Casey Hampton and Aaron Ross are the only Texas Exes to win two titles. Had New England won, defensive lineman Malcom Brown would have joined that quartet: