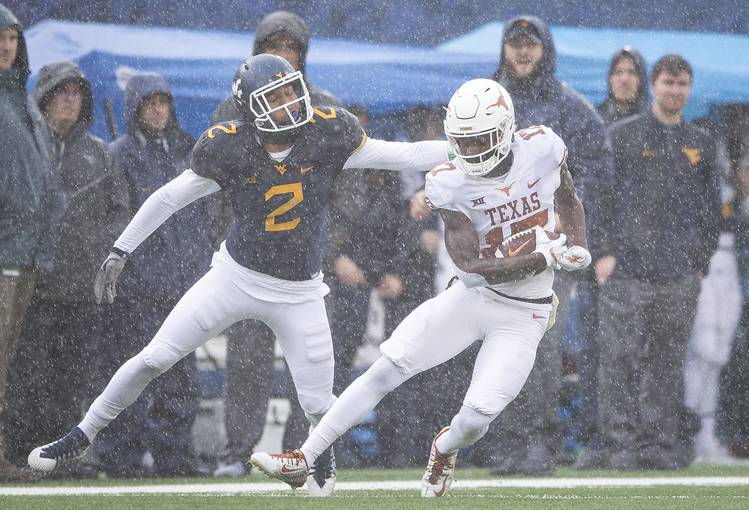 On a day it welcomed eight players to its program, Texas can also erase a name off its roster.

With a tweet, receiver Reggie Hemphill-Mapps announced on Wednesday that he is leaving the Longhorns. Hemphill-Mapps was a redshirt freshman during the 2017 season. Reports began circulating last month that he would transfer.

“We wish Reggie the best, hope he finds what he’s looking for out there,” Herman said. “But next man up.”

Thank you Texas, will always be in my heart🙏🏾❤️ #GodsPlan pic.twitter.com/IjfDpv8JE4

Once a three-star recruit out of Manvel High, Hemphill-Mapps redshirted in 2016 but began impressing Tom Herman’s coaching staff during this past spring’s practices. Hemphill had seven receptions in his first game, and his 91-yard punt return in that 51-41 loss to Maryland is the third-longest in school history. He also produced a 12-catch performance against Kansas State.

Hemphill-Mapps ended the season with 37 catches, which was exceeded among the Longhorns by only Collin Johnson. Hemphill-Mapps averaged 10.9 yards per catch. He, however, did not record a receiving touchdown and was held without a reception in games against Baylor and Kansas.

Without Hemphill-Mapps, Texas will still retain three receivers who caught at least 20 footballs in 2017. Texas signed receivers Al’Vonte Woodard or Brennan Eagles in December, and Yoakum’s Joshua Moore became a Longhorn on Wednesday. Additionally, Jordan Pouncey was a three-star recruit who redshirted this past season.