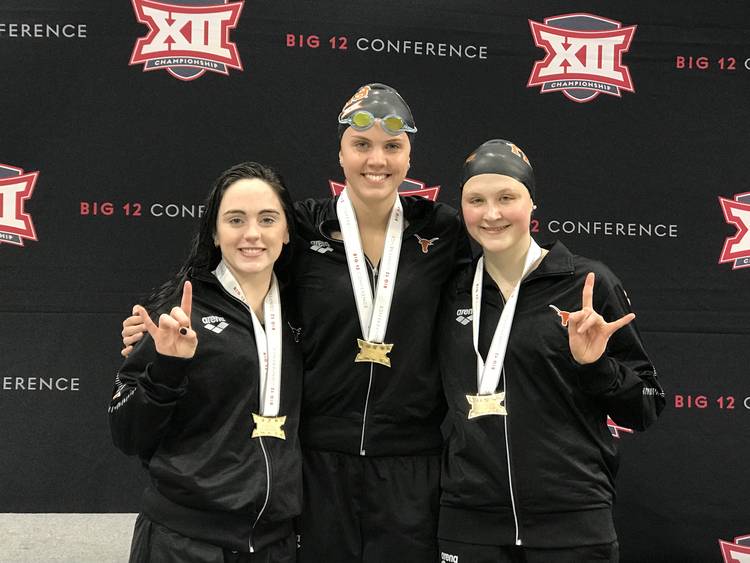 It’s almost a given that the Texas men and women’s swim and diving teams will win a Big 12 title.

The Longhorn men are aiming for their 39th straight, dating back to the old Southwest Conference days. The women are going for their sixth straight league championship.

And on Thursday, the first full day of the meet at the Jamail Texas Swim Center, Longhorns won every event.

The most impressive were the performances in the 400-yard medley relays to end the evening.

The women’s team of  Claire Adams, Kennedy Lohman, Remedy Rule and Rebecca Millard won the medley relay in a time of 3 minutes, 29.51 seconds, which was the third fastest in school history and fifth best in the nation this season.

The men’s team of Austin Katz, Austin Temple, Joseph Schooling and Brett Ringgold won the medley relay in a time of 3:05.71, an automatic NCAA cut that also was fifth fastest in the nation.

Texas junior Tate Jackson posted the best individual performance of the night on the men’s side in winning the 50 freestyle. His time of 18.95 seconds was the third fastest in the country. It was the first time he’d been faster than 19 seconds. He’s the fourth Longhorn in school history to ever post a time below 19 seconds.

“Breaking barriers is huge,” Jackson said. “All of the guys on the team were giving me a hard time this morning because this summer I just barely broke the barrier in the 100 long course, 48.99, in the U.S. Open. I am basically the king of 0.99. I told Brett (Ringgold) I was going to go faster tonight, and I did. I am super happy to be under 19.

Jonathan Roberts, one of the country’s top backstrokers,  won the 200 individual medley.

“I wanted to go out as fast as I did this morning,” Roberts said. “I didn’t see my splits, but I don’t think it went according to plan. Thankfully, that gave me extra fuel going into the last 50 yards, and I was able to take it home pretty hard.

Freshman Parker Neri was victorious in the 500 free.

On the UT women’s side, Alison Gibson, the defending NCAA champion, won the 1-meter springboard title. Her point total of 356.25 on six dives set a Big 12 record.

“It means a lot,” Millard said. “The Big 12 championships are really fun. It means sharpening up our races and working on the details, and the details are finally starting to get together. ”

Freshman Evie Pfeifer won the 500 in a time of 4:37.81, which was the fourth fastest in school history. Nora McCullagh won her first ever league title with a victory in the 200 IM.

The meet continues through Saturday.