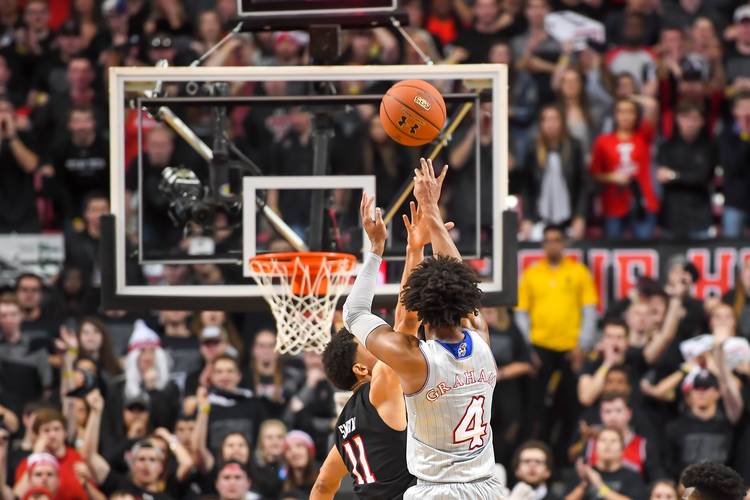 Devonte' Graham #4 of the Kansas Jayhawks shoots the ball over Zach Smith #11 of the Texas Tech Red Raiders during the second half of the game on February 24, 2018 at United Supermarket Arena in Lubbock, Texas. Kansas defeated Texas Tech 74-72.(Photo by John Weast/Getty Images)

Texas at No. 8 Kansas

About the series: Kansas leads the all-time series 30-8. The Longhorns have won only twice in this decade. In this season’s Big 12 opener on Dec. 29, UT’s guards looked helpless at times as Devonte’ Graham hit six 3-pointers. The Jayhawks hit a staggering 17 3-pointers in all, their second-highest total this season. Five Horns were in double figures in a 92-86 loss.

About the Longhorns: All eyes will be on Mo Bamba’s sprained left toe. He did not play in the second half of Saturday’s game against Oklahoma State, and he was questionable last Wednesday against Kansas State. It’s possible Bamba sits this one out. However, this is likely to be Bamba’s only trip to Allen Fieldhouse as a college player. … If Eric Davis Jr. has to sit out again, which is likely, that puts more pressure on Jacob Young and Jase Febres to pick up their contributions. Febres has not scored more than six points in any game this month. … Saturday’s win over Oklahoma State was the largest comeback victory of the season. Texas erased a 10-point deficit and captured a 65-64 win.

About the Jayhawks: Senior night is always supposed to be an easy win. Kansas is not only playing its last regular-season home game, but coach Bill Self’s club is looking to finish off its 14th consecutive Big 12 title. Kansas clinched at least a share of the crown last Saturday with a win over Texas Tech. … Devonte’ Graham continues to be a thorn in opponents’ side. He scored 18 points in the final 14 minutes against the Red Raiders. He now ranks 15th on the schools career scoring list. … Svi Mykhailiuk finally got back over the 20-point mark over the weekend. He has scored at least 20 points in 10 games this season, but Saturday’s game was his first in February.