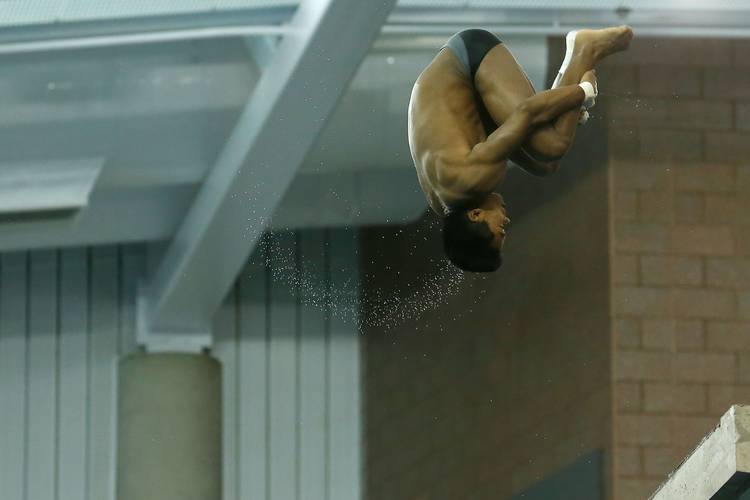 The Texas men won their 39th straight swimming and diving conference title, highlighted by a record-setting performance from freshman diver Jordan Windle at the Big 12 Championships on Saturday at the Jamail Texas Swimming Center.

The women’s team swept all 21 events at the competition to claim its sixth straight Big 12 title. They scored 1,021 points, beating West Virginia by nearly 400 points.

Windle broke the NCAA record in the men’s platform diving event by scoring 579.60 points to take the win. His mark shatters the previous record of 560 points held by Nick McCrory of Duke.

The freshman scored multiple perfect scores on four of his six dives in the final. Windle’s third dive earned perfect scores from six of the seven judges for 111 points.

“I’m still wowed by it,” Windle said. “A lot happened in this competition so I’m still trying to take it all in, but I’m really ecstatic about coming out on top and setting an NCAA record. Being able to dive my best was just incredible.”

The Longhorns scored 1,052 points, beating West Virginia by over 100 points for the men’s title.

Austin Katz broke the meet record in the 200-yard backstroke by finishing the race in 1 minute, 39.10 seconds. Quinn Carrozza won the women’s event in 1:53.18.

Tate Jackson won the 100 freestyle in 41.27 to set new school and Big 12 records in the event. Claire Adams set a meet record in the women’s event, finishing the race in 47.46.

The men finished the meet with a win in the 400 freestyle relay. Townley Haas, Brett Ringgold, Jeff Newkirk and Jackson teamed up for the win.

The women completed the 21-event sweep with a victory in the 400 freestyle relay in 3:11.72. Anelise Diener, Adams, Brooke Hansen and Rebecca Millard finished off the relay for the Horns.