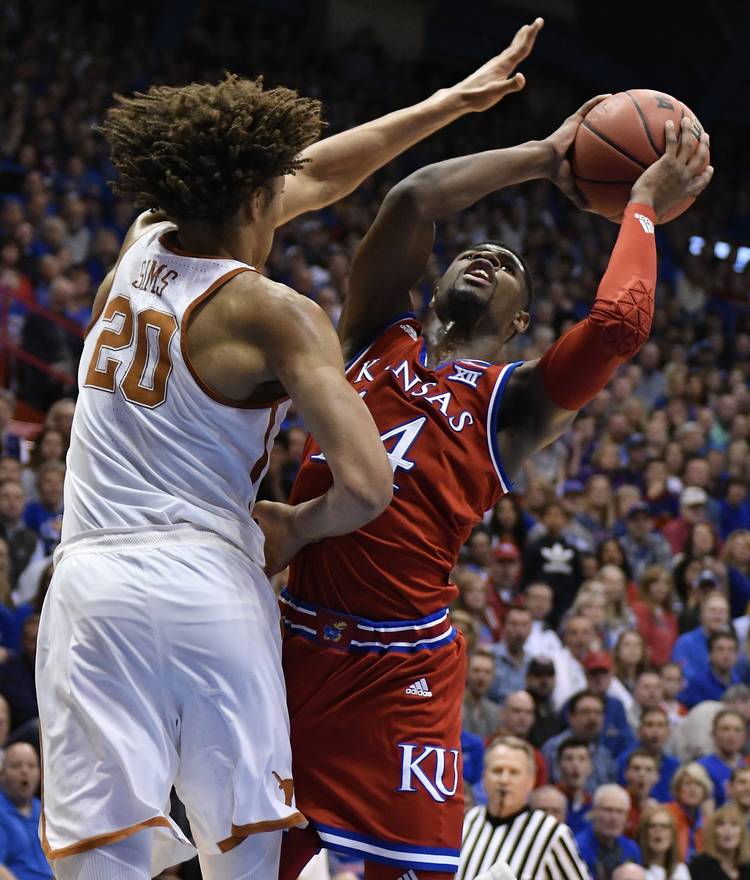 Malik Newman #14 of the Kansas Jayhawks shoots against Jericho Sims #20 of the Texas Longhorns in the first half at Allen Fieldhouse on February 26, 2018 in Lawrence, Kansas. (Photo by Ed Zurga/Getty Images)

LAWRENCE, Kan. — Had things gone differently inside Allen Fieldhouse, this would have been the night Texas immortalized the Magnificent 10.

The Longhorns had only 10 players dressed in a late-season Big 12 matchup against the Big 12 champion Jayhawks. One of those missing was freshman Mo Bamba, who was back in Austin nursing his sprained left toe.

Texas simply didn’t have enough personnel or offensive firepower to keep up with sixth-ranked Kansas. It was a seven-point game with 1:17 remaining as the Horns put up one of their grittiest performances of the season. Still, Kansas finished off a 80-70 victory before another sold-out crowd of 16,300.

Dylan Osetkowski finished with 13 points and five rebounds before fouling out with 7:28 remaining. And Jericho Sims had some big buckets, prompting the Big 12 observer courtside to blurt out, “That kid’s gonna be good.” Sims finished with 12 points and eight boards.

The coaching staff hopes Bamba can feel better before Saturday’s regular-season finale. It’s also unclear whether Texas will get Eric Davis Jr. back by then. He was held out of action for the second consecutive game while UT compliance officials look into whether he accepted $1,500 from an agent, as alleged in the Yahoo Sports report.

With about two minutes left in the first half, Roach walked off the floor and went straight to the trash can. Fans sitting right behind the bench turned their heads. They couldn’t watch, either. Roach sat for a moment, collected himself and headed back to the scorer’s table. He was everywhere in the second half, even running out of his shoe at one point.

As outmanned as Texas was, Young’s 3-pointer from the left wing made it a six-point game with 15:12 remaining. Sims started the second half with two buckets, Matt Coleman hit a jumper and Osetkowski scored on a put-back and drew a foul.

Only problem was Kansas had a quick answer for darn near everything. Marcus Garrett scored after Young’s trey, and Graham hit a 3-pointer after a wild scramble on the floor. Midway through the second half, Kansas hit 6 of 8 shots and grabbed a 69-54 lead.

Some of these KU records are just crazy. The Jayhawks are now 37-1 playing home games on ESPN’s “Big Monday” telecast. Since the 1983-84 season, Kansas has won 35 straight regular-season home finales. That includes 34 senior nights; the 2007 team had no seniors. And the Jayhawks are now 31-8 in the all-time series against the Horns. That includes a 16-1 mark in Lawrence.

Kansas rang up 92 points in the first game on Dec. 29 by hitting 17 3-pointers. The Jayhawks didn’t go crazy from beyond the arc this time, but with no Bamba guarding the paint, they got tons of easy points inside. A 16-0 KU run in the first half featured a little bit of everything — two Graham 3-pointers, two Udoka Azubuike dunks and two strong moves to the bucket by Svi Mykhailiuk. At that point, Kansas was a staggering 12 for 17 (.706) from the floor and led by 14.

Saturday’s regular-season finale against West Virginia now appears to be a major NCAA Tournament moment. If the Longhorns can win, they’ll have eight league victories. Some prognosticators believe that’s enough to get into the tournament. If Texas loses, that puts enormous pressure on Smart’s club in Kansas City at next week’s Big 12 tournament.