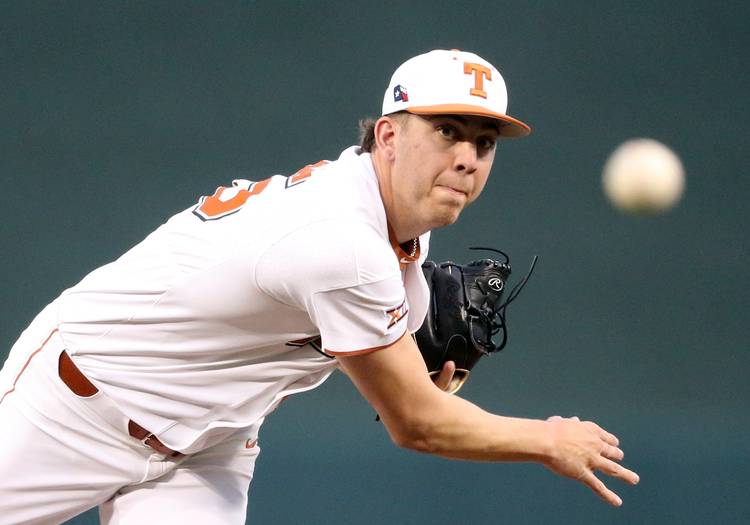 Ahead of Friday’s conference opener against Kansas, Texas junior pitcher Nolan Kingham showed off his personality. He then showcased his right arm.

Kingham went the distance as UT strolled to a 14-4 win over the Jayhawks. The rout at UFCU Disch-Falk Field was recorded one day after the death of Longhorn legend Augie Garrido, who was Kingham’s coach in 2016. Kingham said it was a “true honor” to play for the 79-year-old Garrido.

Against Kansas, Kingham retired the first nine batters he faced and didn’t issue a walk. He did plunk two Jayhawks and allow 10 hits, two of which were home runs. The UT defense, however, turned three double plays. Additionally, Kingham recorded one of his three strikeouts on the final play of the sixth inning before catcher DJ Petrinsky caught a runner attempting to steal.

Three publications dubbed Kingham as a preseason All-American, and he certainly looked the part in Texas’ season opener against Louisiana-Lafayette. Kingham, though, was roughed up in starts against LSU and Stanford. He picked up a win against Northwestern on March 3, but allowed seven hits and three runs in 5 2/3 innings.

Before Friday’s start, Kingham changed the introductory song that would play over the loudspeakers as he warmed up. Kingham opted for Wild Cherry’s “Play That Funky Music,” which was the song that reminded him of last year’s all-conference campaign.

“Coming off of last year, I think that was the appropriate song to do,” Kingham said. “Then I just got away from it, I wasn’t being myself. I went back to the goofy song that kind of got me in the groove a little bit.”

Kingham’s complete game did little to help his ERA — it only dipped from 4.56 to 4.41 — but it provided Texas with some much-needed rest. UT was playing its seventh game in nine days, and 15 different pitchers had been used in UT’s previous six games. (Five Longhorns had thrown three times).

Texas coach David Pierce had freshman Kamron Fields ready in the ninth inning. Kingham, however, only needed 97 pitches to complete the third complete game of his career. He improved to 3-2 on the season.

“We needed a great pitching performance to protect our bullpen from the previous week,” Pierce said. “Nolan did a great job of pounding the strike zone. They hit him around a little bit, but he didn’t walk anyone and gave us an opportunity to rest those guys.”