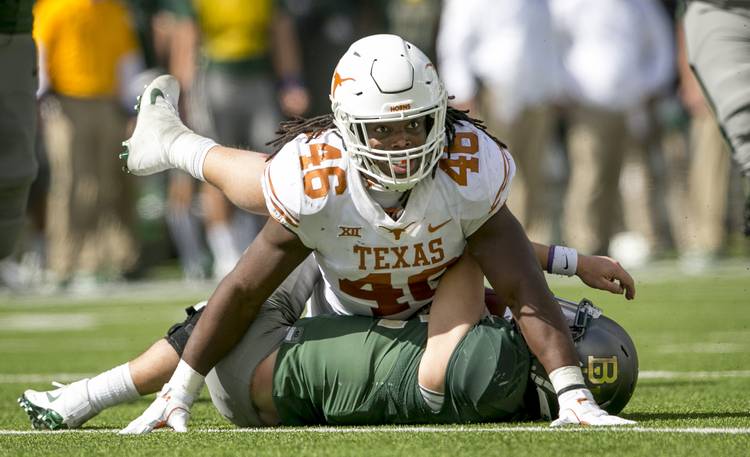 At the NFL Draft on Friday, the Cincinnati Bengals used a third-round pick to select former Texas linebacker Malik Jefferson.

The 6-2, 236-pound Jefferson was the 78th prospect and second Longhorn off the board. Earlier in the evening, offensive lineman Connor Williams was drafted by Dallas with the 50th pick.

Thanks to a Pizza Hut promotion, Jefferson also earned some free pizza on Friday night.

A five-star recruit out of Mesquite Poteet, Jefferson was the highest-rated signee of Charlie Strong’s tenure at Texas. Jefferson started nine times in 2015, and the then-freshman finished second among the Longhorns with his 61 tackles. Jefferson had 62 tackles the following year, but his sophomore season did not live up to lofty expectations.

This past year, Jefferson thrived as the rover linebacker in Todd Orlando’s defense. Jefferson compiled 110 tackles and four sacks over 12 games, and he recorded double-digit tackles in six contests. Jefferson split the Big 12’s Defensive Player of the Year award with Oklahoma’s Ogbo Okoronkwo.

Since 2010, eight Longhorn linebackers have been selected in the NFL Draft.