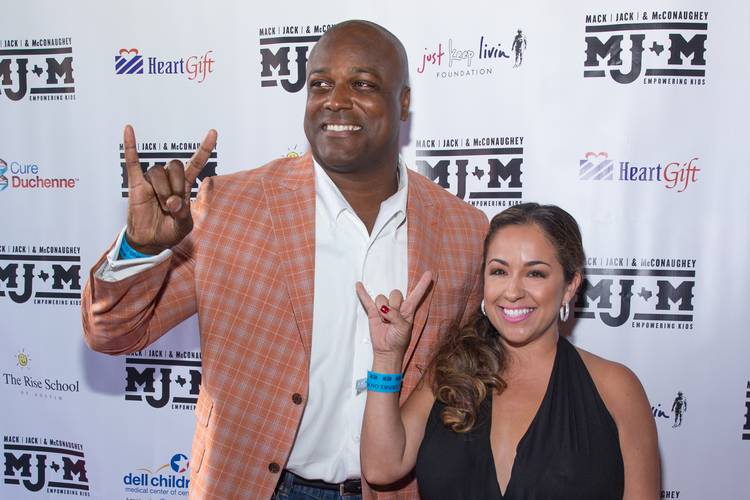 Cory Redding and his wife, Priscilla pose on the red carpet during the Mack, Jack & McConaughey (MJ&M) Gala held at ACL Live on April 14, 2016. Suzanne Cordeiro for American-Statesman

Longhorns legend Cory Redding Sr. has provided an excellent example of walking the walk and talking the talk when it comes to being a constant positive influence in his community, both during his 13-year NFL career and in his retirement. He and his wife Priscilla were just named NFL Alumni Couple of the Year by the Center for Child Protection for their efforts in supporting young people in need through their Cory Redding Foundation.

Redding, a board member on the Fellowship of Christian Athletes which serves Austin, Central Texas and the Hill Country, will impart words of wisdom to some very fortunate young athletes during the week of the third annual FCA Unity Bowl Football Game in Georgetown on June 15.

“The idea behind it was to have the top talented players from around Austin display their gifts on the field and at the same time, learn about Christ as well,” he told me this week.

Players and cheerleaders will arrive on June 12 and stay with selected host families. Most important, they will receive motivational speeches from Redding and others who will share the value of their experiences in sports through a spiritual base.

Faith, family and football. How many times have you heard those three words linked together? That’s why events like this one are so important. Redding has retired from the game he loved but he will never retire from being a help to others in his community. The world could use more like him.

For the rest of Cedric’s Nuggets, including his thoughts on the Supreme Court’s ruling on sports gambling and Tiger Woods’ performance over the weekend, click here.

REPORT: FOX to televise Red River Showdown of Texas and Oklahoma in 2018