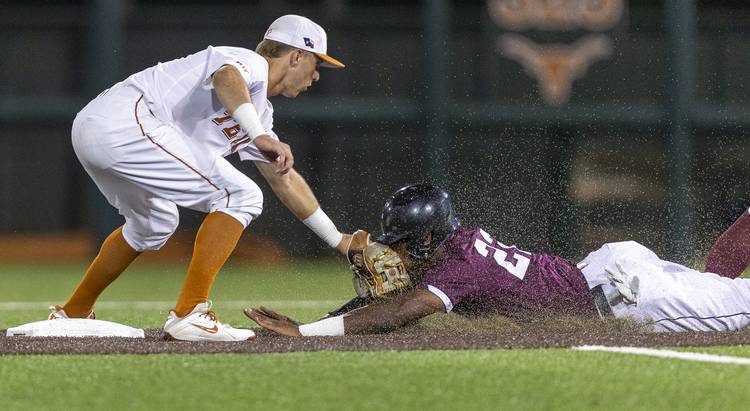 Texas infielder Kody Clemens gets the tag out as Texas Southern's Olajide Oloruntimilehin tries to steal second base during an NCAA regional game at UFCU Disch-Falk Field on June 1, 2018. (Stephen Spillman / for American-Statesman)

In its opener of an NCAA regional at UFCU Disch-Falk Field, Texas was not very welcoming to its guests from Texas Southern.

Friday’s 10-0 score sets up a postseason meeting between Texas and a Texas A&M team that opened its postseason with a rout of Indiana. The Longhorns (38-20) and Aggies (40-20) will battle at 6 p.m. on Saturday.

Junior catcher DJ Petrinsky paced the Longhorns’ offense over the first three innings on Friday. Petrinsky scored the game’s first run on a second-inning error. His three-run homer then gave Texas a 5-0 lead in the third inning. Texas exited the third inning with an insurmountable 6-0 advantage.

Earning the win was UT right-hander Chase Shugart, who allowed four hits and no walks. Shugart threw 69 pitches over six scoreless innings. Texas coach David Pierce said earlier in the week that following Friday’s start, Shugart could be an option later in the regional.

Texas Southern (27-27) will meet Indiana (38-19) in an elimination game on Saturday afternoon.