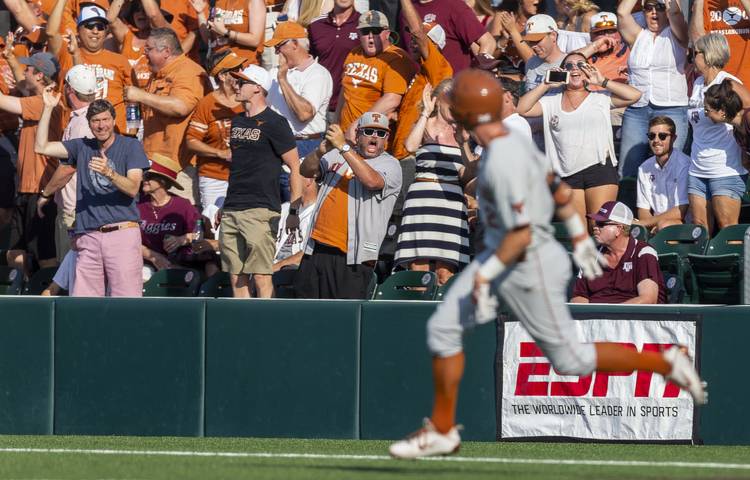 Texas fans cheer as Kody Clemens rounds the bases after hitting a three-run homer against Texas A&M during an NCAA regional game at UFCU Disch-Falk Field on June 2. The electricity is back at the UT ballpark, and a group called OccupyLF is a big part of it. (Stephen Spillman / for American-Statesman)

In front of 7,046 fans at UFCU Disch-Falk Field on Saturday night, Texas rolled past a rival and put itself in the driver’s seat of an NCAA regional.

Still unbeaten in the double-elimination competition, Texas (39-20) will play either Indiana (39-18) or Texas A&M (40-21) at 8 p.m. on Sunday. (The Hoosiers and Aggies will battle at 2 p.m. that afternoon). If needed, a winner-takes-all game will be played on Monday.

"This is the game and this is the series, where you cement your legacy if you're a Longhorn or an Aggie."

Texas was designated as the road team on Saturday, but the Longhorns quickly made themselves feel at home. After Texas got its first two batters aboard, Kody Clemens hammered an offering from Mitchell Kilkenny over the fence in right field. With that swing, Clemens became only the third Longhorn to hit 20 homers in a single season.

Texas eventually added five more runs. Three of UT’s 15 hits against the Aggies were homers. Catcher DJ Petrinsky hit his second home run in as many nights and Clemens went deep again in the sixth inning.