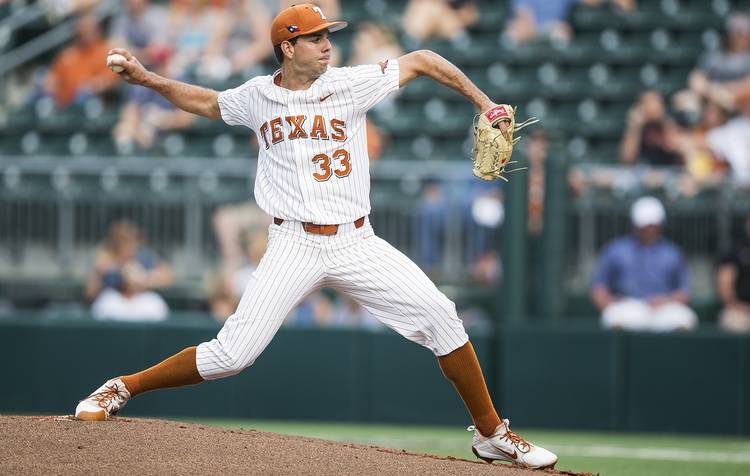 In its biggest game of the season, Texas will hand the baseball to junior Matteo Bocchi.

Texas has announced that Bocchi will be the starting pitcher for the third and decisive game of its NCAA super regional against Tennessee Tech. An Italian native who transferred to Texas this year from Odessa College, Bocchi is 3-1 with 31 strikeouts, 20 walks and a 3.34 ERA. The right-hander was solid in a weather-shortened start against Texas State on May 15, but he struggled with his control against Kansas in the Big 12 tournament.

Sophomore Blair Henley would normally start for UT in the final game of a three-game series. He, however, picked up a three-inning save against the Golden Eagles on Sunday.

Let’s do this. #HookEm 🤘 pic.twitter.com/IVWZ4n4nhd

Bocchi has never worked more than 4 1/3 innings in a game, but Texas is likely looking for quality over quantity against Tennessee Tech. UT coach David Pierce said on Sunday that all of his pitchers — including Nolan Kingham and Chase Shugart, the first two starters in this series — will be available to pitch. Including first baseman Jake McKenzie, who has pitched three times this season, Texas is carrying 14 pitchers on its postseason roster.

Opposing Bocchi will be Tennessee Tech junior Alex Hursey, a southpaw who boasts an 8-4 record and 4.52 ERA. In his last appearance, Hursey picked up a complete-game win in a regional game against Missouri State. Tennessee Tech coach Matt Bragga said the Golden Eagles will see what Hursey has and “then we will ‘Johnny whole staff it’ from there.”