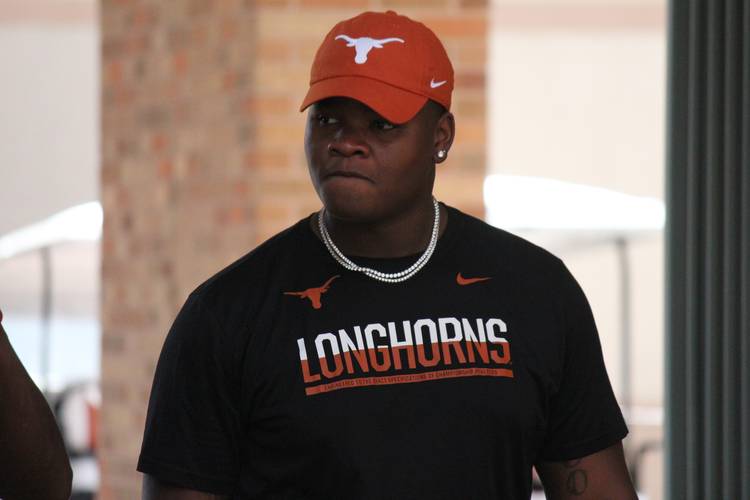 Texas remains atop for Javonne Shepherd

Texas and Texas A&M might not face each other on a football field, but that doesn’t stop the two long-time rivals from competing on the recruiting trail. The latest target caught in the battlefield is four-star offensive tackle Javonne Shepherd. The 6-foot-6, 319-pound prospect is ranked No. 27 on the 2019 Fabulous 55.

Shepherd, along with dozens of top targets in the 2019 and 2020 class, converged on campus for Texas’ second annual Heat Wave pool party. Don’t expect a decision anytime soon from Shepherd. He conceded he wanted to take all five official visits before picking a school. Texas is on top, at least for the moment.

“It is recruiting and I’m trying to stay patient. Texas is still no. 1, for sure,” Shepherd said following the event. “It is the team, the staff and everything else about the program. They treat you like family.”

Shepherd plans on taking unofficial visits to Georgia and Alabama this summer.

“I’m staying patient and going slow with everything,” he said.

Shepherd wasn’t the only superstar from North Forest High School to attend the Heat Wave. Shepherd was joined by four-star 2020 wide receiver Demond Demas, who recently won a Class 4A state championship in the long jump. The 6-foot-4, 200-pound prospect already holds 48 offers.

“The track championship was another accomplishment, but I just try to stay humble and make new goals, so I never get caught sleeping,” Demas said. “There are always ways to motivate yourself to improve.”

The Heat Wave is an informal visit, allowing targets to bond with the coaching staff, fellow recruits and current players in a setting built for fun. Demas is building a strong relationship with wide receiver coach Drew Mehringer and had a great time Saturday.

“It was fun just being around the players and coaches. It was great coming here with my teammates and friends,” Demas said. “Coach Mehringer is my guy. All of the coaches keep it real with me and I try to keep it real with them.”

Demas is about to release a top eight and Texas will be included. It’s also possible that the decision of Shepherd tips the eventual destination of Demas. The two are life-long friends and discuss the recruiting process daily.

“We remind each other to stay humble and keep a clear head,” Demas said. “We’ve grown up each other since we were babies. The maturity is there for us because we tell each other when we’re right and when we’re wrong. That’s a true friendship.”