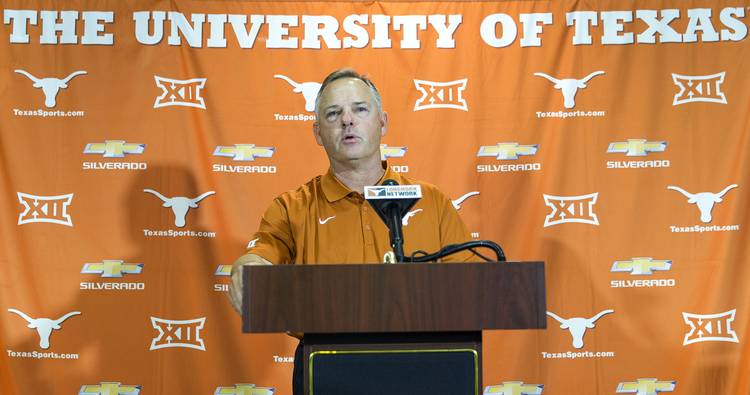 OMAHA, Neb. – Texas coach David Pierce will wear the No. 16 – the late Augie Garrido’s old number – for the entirety of the Longhorns’ stay at the College World Series.

Garrido, 79, passed away on March 15 after suffering a stroke in California. Garrido was UT’s baseball coach from 1997-2016. He won 824 games and two national championships during that 20-year run.

Pierce came up with this idea to honor Garrido when he recently saw pictures of Garrido wearing the No. 2 during the 2003 College World Series. Garrido had switched numbers with Seth Johnston as a tip of the cap to ex-UT baseball player Woody Woodman. The former all-Southwest Conference infielder and Longhorn Legacy associate director died a day before Texas’ first game in Omaha.

Pierce’s plan was blessed by Garrido’s widow, Jeannie. Texas players – 10 of which played for Garrido – were also told beforehand. Pierce, who normally wears No. 22, will have the honorary number available in all four of UT’s uniform combinations.

The all-time winningest coach in college baseball until Florida State’s Mike Martin broke that record in May, Garrido was a fixture in Omaha. He guided Texas to the College World Series on eight occasions, the last of which came in 2014. His Cal State Fullerton teams made seven trips.

Garrido’s absence from Omaha has been a topic of conversation. On Friday, coaches from the College World Series’ participating teams were asked to share their memories of Garrido.

“They mentioned last night they’ve been doing the opening ceremony since ’98, and I was thinking, heck, Augie probably went to 20 of those before they even started doing that,” joked Texas Tech coach Tim Tadlock.