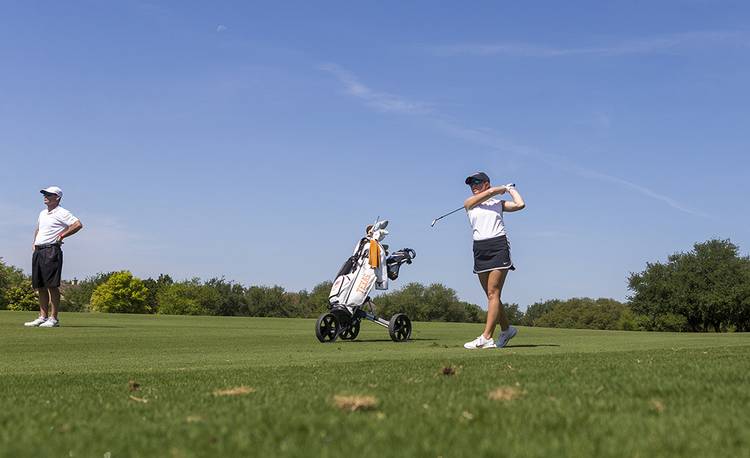 With help from Texas Longhorns Kaitlyn Papp and Sophia Schubert, the U.S. team is up 20½-15½ over an international team after two days in the Arnold Palmer Cup at Évian-les-Bains, France.

Papp, who will be a sophomore at UT this fall, paired with SM Lee to halve a foursome match against Jaravee Boonchant and Fredrik Nilehn on Saturday morning. In the afternoon, she and Lake Travis High School graduate Kristen Gillman, who now plays for Alabama, won their four-ball match 5 and 4 against Maria Fassi and Ainhoa Olarra.

Schubert, who was an All-American as a senior at UT in the spring, teamed with Lauren Stephenson to beat Albane Valenzuela and Dewi Weber 3 and 2 in a four-ball match. Schubert had lost her morning foursome match with Zach Bauchou to Harry Hall and Wenyung Keh 3 and 1.

On Sunday, the competition will feature 24 singles matches, and those will complete the team totals to determine the Palmer Cup winner.

Volleyball: Former Longhorns Molly McCage and Chiaka Ogbogu will be part of the U.S. team competing Sunday through Saturday in the Women’s Pan Am Cup at Santo Domingo, Dominican Republic.

They are part of a 14-player squad chosen after training since May in Anaheim, Calif.

The competition will begin with pool play, and the U.S. will face Trinidad and Tobago on Sunday, Cuba on Monday and Puerto Rico on Tuesday. The tournament will continue with quarterfinals Wednesday, semifinals Friday and the medal round Saturday.