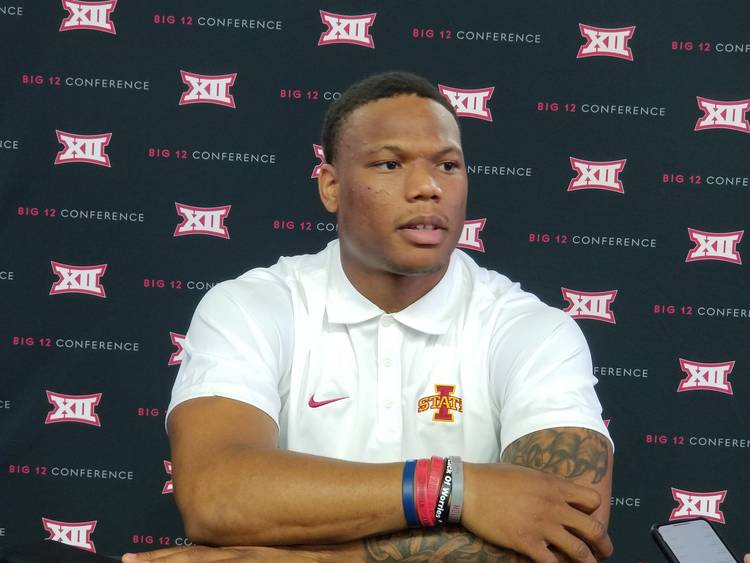 Iowa State star David Montgomery could be the top running back drafted by the NFL next year. (Suzanne Halliburton/American-Statesman)

Iowa State’s David Montgomery could be the top Big 12 player selected in next year’s NFL draft, with some way-too-early projections listing him as the top tailback available.

But Montgomery, a junior, swears he’s not paying attention to any draft buzz.

Instead, he’s just the guy who likes to read, stay in the post-game film room until someone kicks him out and play mellow music while he’s fishing to entice the walleye and bass to bite.

Montgomery is currently reading “Rich Dad, Poor Dad” to get a better understanding of money.

Montgomery also earned Eagle Scout while he was growing up in Cincinnati. His project involved setting up personal hygiene product donations to a local homeless shelter.

He also doesn’t tolerate his own mistakes, lingering in the film room for hours after home games. He stayed up til 3 a.m. watching video after one night game.

“I don’t like messing up,” he said. “I wasn’t happy about my game and I wanted to fix it.”

Texas Tech’s Kliff Kingsbury is known for flashy offenses and flashy fashion. On Monday, he sported a muted purple and blue plaid suit, purple striped tie and a blue flower lapel pin. He said he picked purple because it was a “good summer color.”

Kliff Kingsbury looking fashionable for his appearance at #big12mediadays pic.twitter.com/BfHpXRGs3T

OU coach Lincoln Riley has received some blowback from SEC fans after he said Georgia wouldn’t boast a top five national defense if the Bulldogs played in the Big 12.

Riley made the comments to Danny Kanell during an interview on ESPNU’s radio program on Sirius/XM.

But Riley said Monday he didn’t mean it the way it sounded.

Here was the exchange when Riley was at the podium for his media day appearance:

Q. “Lincoln, you recently made comments on the radio about defense and a certain team from the SEC. Were you surprised at how those things were construed maybe nationally and how sort of big it became at least in Oklahoma?”
LINCOLN RILEY: “Not really. It’s a slow time media wise. I get that. I think you had some people that read probably one sentence out of the entire deal and that’s what they took from it. When, in fact, my comment had nothing to do about Georgia specifically and everything to do with the Big 12 and the quality of offenses in this league, and not just last year but in recent history.

“I think it’s a very fair point that even if you had a, what is a top-5 defense in the country that statistically that would be tough to maintain if you played in the Big 12 conference and played the quality of offenses that we see week-in and week-out. I think if you look at offensively these leagues over the past 10, 15 years, I think that’s well supported. There are good offense in every league, there are really good defenses in every league. But the best offenses in the country over the last fifteen years have been in the Big 12 conference and that’s what I based my point on.”

The Bulldogs knocked off the Sooners, 51-48, in last year’s Rose Bowl.

Although preseason doesn’t start for another two weeks, the Big 12 wants you to think about bowl season. The biggest display at the Ford Center was the one featuring the trophies for all the bowls affiliated with the Big 12 along with the conference championship trophy.

The Fiesta Bowl always seems to be the biggest and most colorful.