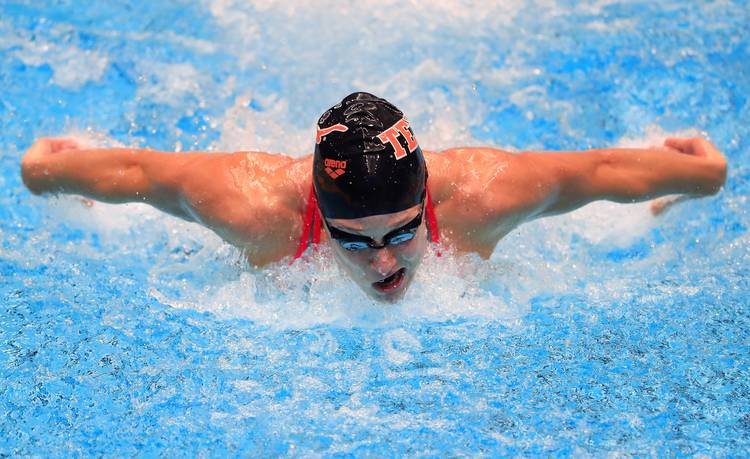 Former Texas swimmer Madisyn Cox, a two-time world medalist, has been given a two-year suspension after testing positive for a banned substance.

The suspension was handed down Wednesday by FINA, the federation that oversees international swimming competition.

In a statement provided to SwimSwam.com on Friday morning, Cox said she believes she ingested the substance, Trimetazidine, by drinking tap water at her Austin apartment. She also said the positive test was for an “unfathomably low” amount of the substance.

“I am devastated,” she said in the statement. “I honestly believed through this entire process that I would receive a No Fault ruling, due to the strength of my case, a completely clean hair sample, dozens and dozens of clean tests and a history of carrying myself with honor and integrity throughout my academic and swimming career. I stand on my personal and competitive reputation.”

Cox’s full statement can be found on SwimSwam.com, and the full FINA Doping Panel decision can be viewed here.

The panel found Cox’s testimony to be credible, but decided not to dismiss the positive test due to a lack of clear evidence. Among other reasons, the panel said that “no water test data is available for the greater Austin area’s water supply.”

Cox said she is looking into whether that type of testing can be done.

“Ms. Cox is an honest, very hardworking and highly credible athlete who is not a ‘cheat,'” read the findings. “She is, unfortunately, caught in a dilemma.”

The out-of-competition urine test was conducted on Feb. 5 in Austin, and Cox last competed at a Pro Swim Series event in Atlanta on March 3. Her suspension ends on March 2, 2020. She is entered in five events at the U.S. Nationals meet that begins next week, but will not be able to compete barring an extremely fast appeal.