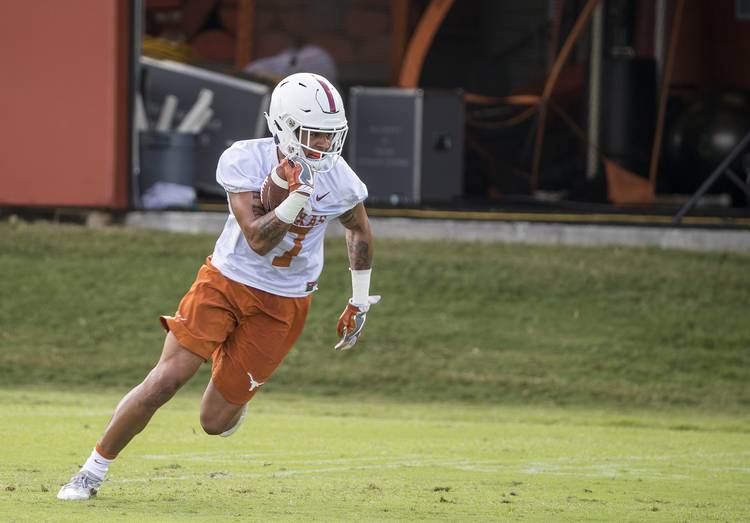 Texas freshman Caden Sterns runs with the ball during a practice at the Denius Fields on Aug. 4, 2018. RICARDO B. BRAZZIELL / AMERICAN-STATESMAN

Texas held its second practice of the season on Saturday, and the media was granted access to around 20 minutes of drills. Here are three observations:

1. Could Caden Sterns be the first member of UT’s 2018 recruiting class to have his number called this fall?

Texas will start at least three of those safeties since the nickelback works out in that group. An extra defensive back will also be needed for the dime package.

On Saturday, Naivar implored Sterns to communicate louder with his teammates. For the most part, though, Texas coaches have sung the praises of the five-star recruit from Cibolo Steele.

2. Texas nose guard Chris Nelson is still wearing a brace on his left elbow. Nelson, however, was not wearing a non-contact jersey as he ran with the first-string defense on Saturday. Nelson previously said at the Big 12 media days that he was healed from an elbow injury that sidelined him from the Texas Bowl and contact drills during the spring.

Read more: The next Poona Ford? Texas just needs Chris Nelson to be ‘steady’ on its defensive line

Nelson, a senior who started seven times at defensive end last season, is one option for defensive coordinator Todd Orlando as Texas searches for Poona Ford’s replacement. During spring drills, Jamari Chisholm and Gerald Wilbon fought for playing time behind Nelson. Sophomore Ta’Quon Graham, a 285-pound defensive end, has also been named as a possibility in the middle of the defensive line.

3. Over the first two days of practice, Texas freshman D’Shawn Jamison has donned an orange jersey. The color of Jamison’s jersey is significant in the sense that it indicates he’s working with the offense. The defensive-minded Longhorns have been outfitted in white jerseys.

Recruited as a four-star cornerback, Jamison was listed as a receiver when UT released its initial roster for the fall. At the Big 12 media days, Texas coach Tom Herman clarified that Jamison would be used on offense and defense.

Herman told reporters on Friday that the UT coaches hadn’t yet settled on a practice plan for Jamison. Herman suggested the first few days of Jamison’s fall camp will be spent on offensive tutorials. (Jamison did not catch a ball over three years of varsity football at Houston Lamar). Some defensive drills, though, are expected on Sunday.

On Saturday, Jamison lined up last in the slot during a route-running drill. Jamison showed decent hands in front of the media. Texas assistant coach Drew Mehringer did make him rerun a route at one point.

Herman said Jamison is the only Longhorn who has a two-way role at the moment.