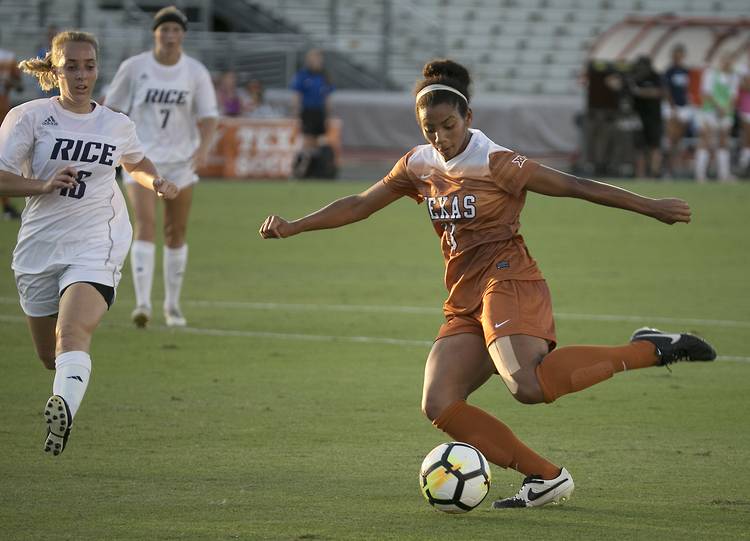 The Texas soccer team cruised to a 3-0 win over the Rice Owls in Houston to open the season Friday night.

Goals by Cyera Hintzen, Katie Glenn and Tecora Turner highlighted the match for the Longhorns.

“Having a clean sheet is obviously something that’s a goal of ours every single time we step on the pitch,” Texas head coach Angela Kelly said on the team’s  Twitter account. “We just battled. I think all three goals were really gritty.”

Texas dominated the game, putting 10 shots on frame while the Owls managed just three. Nicole Curry saved every shot on goal as the Longhorns kept the clean sheet.

Hintzen scored the Longhorns’ first goal of the season in the 31st minute from the left side of the box.

Just after the second half started, the Longhorns nearly made it 3-0 on a goal by Haley Berg. The Longhorns were offside on the play, however, and the the goal wasn’t allowed.

In the 69th minute, a bank of lights went out at Holloway Field, delaying the game. With the pitch in partial darkness, the teams resumed play.

Turner capped the scoring in the 87th minute. She missed a lot of last season due to injury and netted her second career goal for Texas.

The Texas soccer team next travels to Chapel Hill, N.C. for two contests. The Longhorns will face North Carolina Wednesday at 4 p.m. and then take on Central Florida Friday at 4 p.m. They play their first home game on Aug. 30 against Long Beach State at 7 p.m. at Myers Stadium.