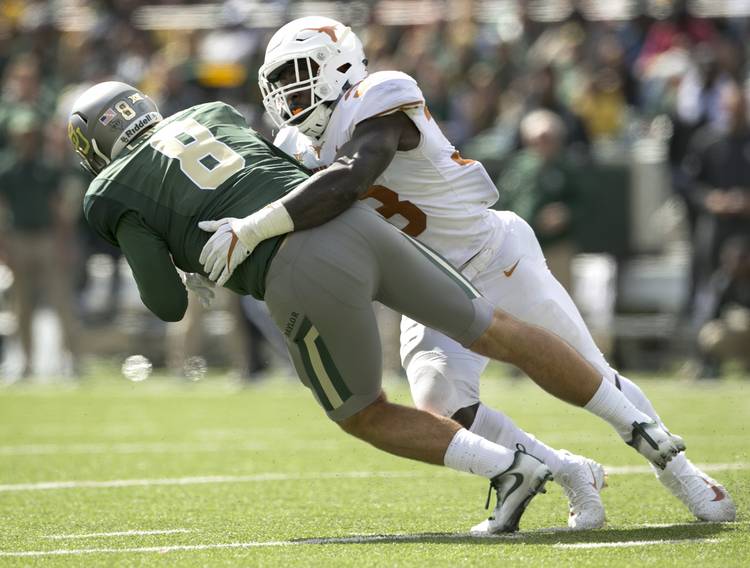 It’s nothing personal, but Gary Johnson would like the quarterbacks and running backs that Texas faces this season to know that he doesn’t like them.

A senior linebacker, Johnson figures to be Malik Jefferson’s replacement at the rover linebacker position this season. After transferring from Dodge City Community College in 2017, the six-foot, 230-pound Johnson compiled 60 tackles in his debut at UT. Johnson worked mainly as a middle linebacker over his seven starts, but he also shined in Jefferson’s absence in the Texas Bowl.

Six of Johnson’s tackles last year were made behind the line of scrimmage.  He also sacked two quarterbacks. If those stats don’t serve as a warning to opposing offenses, perhaps Johnson’s online presence will. For a while, the name on Johnson’s Twitter account (@_GaryJohnson) has read “I Hate QB’s & RB’s.”

“It’s not really a thing where I have to back it up, but at the same time it is,” Johnson told reporters on Tuesday. “If I was to just have that up for no reason and don’t make plays on quarterbacks and running backs, then it would be kind of pointless.”

Johnson didn’t always hate running backs. In fact, he used to be one. Johnson said while lining up as a running back at Alabama’s Douglas High, an opponent once intentionally injured him.

After that incident, Johnson gravitated toward a future on defense. He “just got the mentality that I just want to play linebacker and just smash quarterbacks and running backs. I was just like, I hate them. I just stuck with it ever since.”

There are exceptions to the rule, though. There are at least two quarterbacks that Johnson likes.

Added Johnson with a laugh: “Opposing quarterbacks I hate, but I love Sam and Shane.”