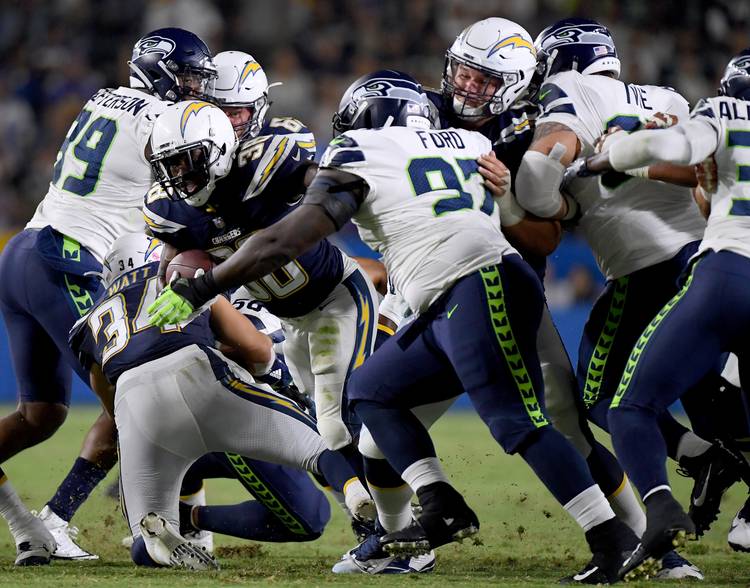 Detrez Newsome #38 of the Los Angeles Chargers carries the ball as he is chased by Poona Ford #97 of the Seattle Seahawks during a 24-14 presseason Charger win at StubHub Center on August 18, 2018 in Carson, California. (Photo by Harry How/Getty Images)

Saturday was a big day for Longhorns vying to make NFL squads. It was cut-down day and all 32 NFL teams had to pare their rosters down to 53 men. Of the 34 former Longhorns attempting to play in the NFL this season, 28 made a roster. Of the 28 Longhorns named to squads, seven are rookies. DeShon Elliott, Malik Jefferson, Connor Williams, Holton Hill, Chris Warren, Michael Dickson and Poona Ford all made the cut. On the opposite end of the spectrum, Phil Dawson is set to begin his 20th year on an NFL team.

Of course, not everyone was happy on Saturday. The Vikings released long-time veteran Brian Robison after 11  years with the team. His release comes at a time when the Vikings are seen as a possible Super Bowl contender after making the NFC Championship game last season.

Sad Day! I love you Vikings Fans, teammates, coaches and all I have come in contact with over the years. This one hurts, but it’s not goodbye. More like see you later. Thank you @Vikings for 11 amazing years and one opportunity. Formal letter to come soon. pic.twitter.com/zney9S5tGD

Here are the Longhorns that got cut Saturday. Don’t be surprised to see some of them scooped up by other teams, or named to practice squads.