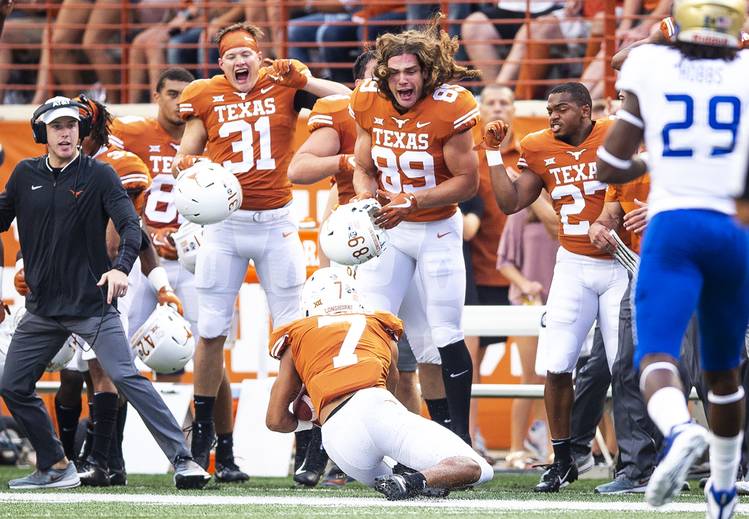 Texas, needing not only a win tonight but also to look good getting it, is leading Tulsa 21-0.

We’ve seen a lot through these first two quarters. Sam Ehlinger has connected on 40-, 36- and 35-yard passes. Caden Sterns had his first career interception — on Tulsa’s first play of the game.

B.J. Foster got his frst career pick as well. There have been two fourth down tries (Tulsa converted its, Texas didn’t). Tulsa has missed not one, not two, not three, but four field goal tries. By two separate kickers. All wide right. Oh, and the Golden Hurricane blocked a punt.

Curious about those missed field goals?

Tulsa’s Nate Walker missed from 43 in the first quarter, then from 29 in the second. He was off the mark on a 36-yarder late in the half, but Tulsa got a second chance because of a roughing the kicker penalty. The Golden Hurricane trotted out John Parker Romo for another 36-yard try, but it went wide right as well.

Tre Watson started the game but it’s the freshman, Keaontay Ingram, that has been the more impressive runner.

Here’s a recap of what’s happened:

Texas 14, Tulsa 0. Sam Ehlinger’s touchdown run was set up by a really nice throw to Lil’Jordan Humphrey in double coverage, and Keaontay Ingram carved up the Tulsa defense on his scoring run. But the Horns failed to punch it in from inside the 3 on their second drive. Freshmen safeties Caden Sterns and B.J. Foster both notched the first interceptions of their UT careers. Tulsa missed a 43-yard field goal try.

Halftime: Texas 21, Tulsa 0. Humphrey got onto the scoreboard for the first time this season on a 40-yard catch that featured two broken tackles. The score capped a five-play drive that featured four runs by Tre Watson and a 10-yard rush by Ingram. Tulsa continued to struggle in its kicking game. Two kickers combined to miss three field goals, although one of those misfires was negated by a UT penalty. Tulsa also dropped a touchdown pass in the quarter that would have cut the Texas lead to 21-7.

Texas won the opening coin flip and will get the ball to start the second half.