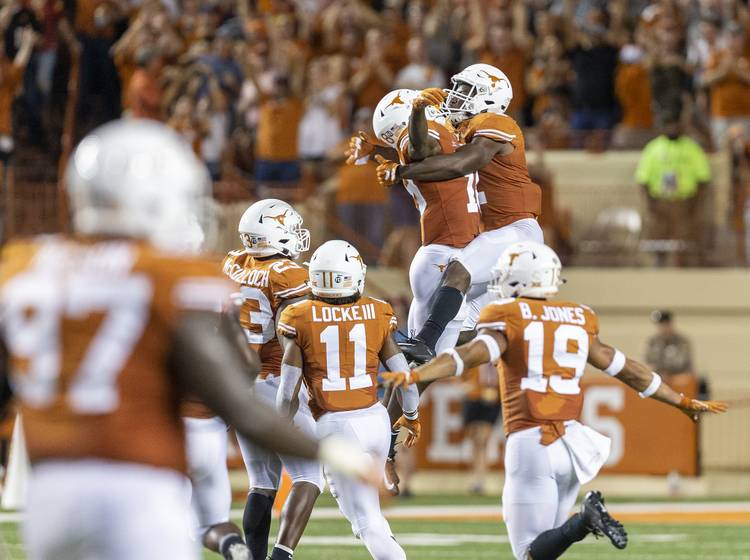 Texas defensive back Kris Boyd, right, celebrates an interception with defensive back Davante Davis (18) in the first half of an NCAA football game at Royal-Memorial Stadium, Saturday, Sept. 15, 2018. (Stephen Spillman / for American-Statesman)

The Longhorns are favored by a field goal tonight.

This one is lacking the offensive fireworks that the 2017 matchup gave us in Los Angeles, but it’s looking just as tight as that one, which ended up going two overtimes.

The crowd showed up. We haven’t gotten an attendance number yet, but we haven’t seen Royal-Memorial Stadium filled like this since the 2016 opener against Notre Dame. Both teams have shown up to play, too.

Texas opened in a hurry-up offense, with Sam Ehlinger finding Collin Johnson for quick 15- and 20-yard gains on the Longhorns’ first two plays. Johnson, who had the huge game in Los Angeles in last year’s USC game (7 catches for 191 yards) has been active tonight. He’s been targeted six times and has 3 catches for 43 yards. He had four targets on that opening drive.

USC’s JT Daniels is playing like you’d expect a freshman who was the national high school player of the year. He’s 16 of 27 for 199 yards and an interception. He’s been sacked once.

The Trojans won the first quarter, taking a 14-3 lead. But the Longhorns shut USC out in the second.

And the star of the game so far: Freshman kicker Cameron Dicker, who’s kicked three first-half field goals of 20, 46 and 46 yards.