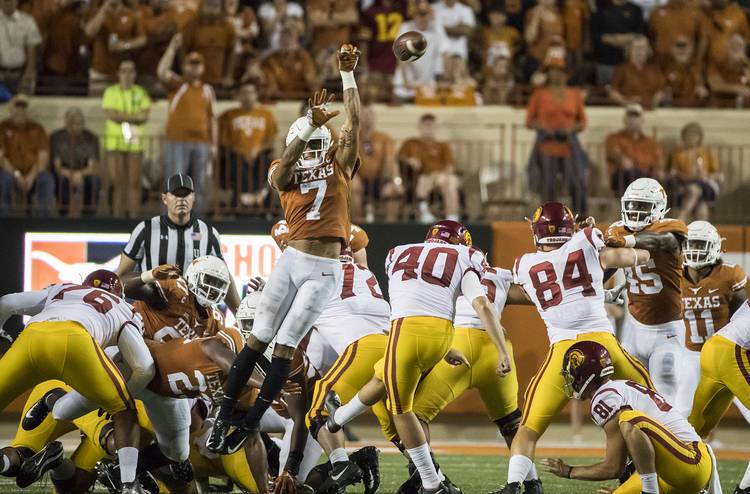 It’s all over at Royal-Memorial Stadium. Texas, which was favored by about a field goal, has beaten No. 22 USC 37-14.

Did we just witness Tom Herman get his signature win at Texas? That’s up for debate. Remember that sky-high overtime win against 10th-ranked Notre Dame to open the 2016 season — against a Fighting Irish team that ended up going 4-8. Herman, who was famously 6-0 against ranked teams while he was at Houston, infamously started out 0-4 vs. ranked teams at Texas. But he has since won two in a row — the 28-14 win over No. 24 last year in Morgantown and this one over the 22nd-ranked Trojans.

Wins over a No. 22 and a No. 24 probably don’t get into that signature win territory. But regardless of rankings, a win over a ranked USC team is big. Very big.

For you history buffs, this was the 1,300th game in Texas football history. And the 900th all-time win. Michigan and Ohio State are the only programs that are in the 900 Victories Club.

Saturday night’s win wasn’t nearly as close. In fact, it was all decided by halftime, as it turned out. The Longhorns shut out the Trojans for the final three quarters.

RELATED: Texas 37, USC 14: One winning play leads to another, sparking a 34-point avalanche in Longhorns romp

RELATED: Bohls: Will this win over USC spark a Texas turnaround? It’s a start

RELATED: Golden: Momentum? Fauxmentum? Whatever you call it, Texas had it and needs to build off it

RELATED: What Tom Herman said after Texas bowled over USC 37-14

RELATED: Third and Longhorns: A closer look at Texas’s 37-14 win over USC

How about six straight scores without a USC answer? Things looked dour at the end of the first quarter, as the Longhorns trailed 14-3. But it was all Texas from there — touchdown, field goal, field goal, touchdown, blocked field goal return for a touchdown, touchdown. A school-record crowd of 103,507 had its breath taken away. We can only assume how the Trojans felt on the field. Sam Ehlinger made plays, Collin Johnson made plays, Lil’Jordan Humphrey made plays, Caden Sterns and Gary Johnson made plays. Texas gained control of the game, seized momentum and controlled the clock. Oh, and it looks like the Longhorns finally have their kicker.

JT Daniels is going to be very, very good. But he wasn’t tonight. In fact, he pretty much looked like a highly-coveted five-star quarterback who graduated high school a whole year early to play college football. He looked flustered at times, he threw off the mark at times and he also made some plays. The Trojans lost their composure in their second straight prime-time loss. They were flagged 10 times for 99 yards, including several costly ones — a targeting ejection of linebacker Porter Gustin, who not only missed virtually the entire second half but also will sit out the first two quarters of the Washington State game; a roughing the passer penalty; a roughing the punter penalty; an unsportsmanlike conduct penalty. The national ranking will go away when the new polls come out.

How it all went down

Texas 37, USC 14. The Trojans were dealt a triple blow all on one play — their top defensive player, linebacker Gastin Porter, was ejected for a targeting penalty on a hit that knocked Ehlinger’s helmet off. Texas went on to score a touchdown for the 23-14 lead and now Porter will miss the first half of next week’s game. Caden Sterns blocked Chase McGrath’s 50-yard field goal attempt and the ensuing touchdown return to make it 30-14 pretty much put this game away.

Final: Texas 37, USC 14. Things settled down after the Longhorns’ flurry of scores over the previous two quarters — six straight scores that went unanswered. Freshman safety B.J. Foster had the hit of the game, but also was ejected for targeting on the play; he’ll miss the first half of the TCU game. USC’s last real shots at points came with 4 minutes left, with a third-and-7 at Texas’ 24. But the Trojans went backward and ended up with nothing.

Spotted at DKR: Vince Young, Roger Clemens, Mo Bamba, Matthew McConaughey, Gov. Abbott. We assume USC superfan Will Ferrell was there, but we didn’t see him.

The Longhorns open their Big 12 schedule. It’s also the second game in what should end up being a season-defining four-game gauntlet — at home vs. USC, at home vs. TCU, at Kansas State in always-treacherous Manhattan, and vs. Oklahoma at the Cotton Bowl.

What Tom Herman said after Texas bowled over USC 37-14