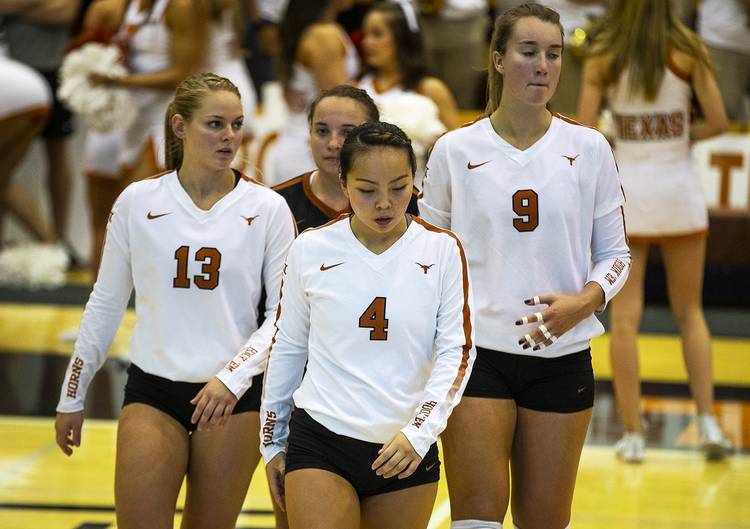 Texas players react after losing 3-1 to Stanford in an NCAA volleyball match in Austin on Sept. 14, 2018. NICK WAGNER / AMERICAN-STATESMAN

Ranked third last week, Texas has been voted into the fifth slot in the AVCA’s national poll this week.

Texas slipped in the polls after losing twice to Stanford, which is the poll’s No. 2 team for a second straight week. Texas was swept in California last Tuesday before Stanford won a four-set battle in Austin on Friday.

With the losses, Texas missed out on a chance to put an impressive win on its resume. Texas (5-3) has beaten No. 11 Florida and No. 12 Oregon, but the team has also lost at No. 6 Wisconsin on Sept. 1.

It’s a possibility (that we still get one of the top seeds). We need some other help now, probably. We control that, too. If we go 18-0 or 16-0 in conference, we put ourselves in a position where we’ll be 21-3. I think BYU will be one of (the top seeds), I think Stanford will be one of them.

But you never know what happens with the seasons. There could be injuries with those teams, there could be a lot of teams that beat each other up in the Big Ten. The Big Ten is going to control what happens. Minnesota lost to Oregon, who we beat, so that helps us out. We’ve got to be better than the second-place team, probably, in the Big Ten.

We can’t worry about that. For us now, it’s just getting better and trying to figure out a way to beat Kansas State and take one game at a time. We’ve been always trying to do that. We can’t get to looking all the way forward. That’s good stuff for you guys (in the media), but for me, it’s trying to figure out how we can get a little bit better.

Texas will travel to Kansas State on Wednesday for its Big 12 opener. The first conference match on UT’s home schedule is scheduled for Sept. 26 when Baylor comes to town.

In June, Texas was picked to beat out Baylor and Iowa State for the conference’s championship. The No. 19 Bears are the only Big 12 team that joined Texas in this week’s AVCA poll.

WATCH: Longhorn Minute: How does Texas match up against TCU?

LISTEN: With Longhorn Confidential’s phones all in airplane mode, is Texas ready for takeoff?