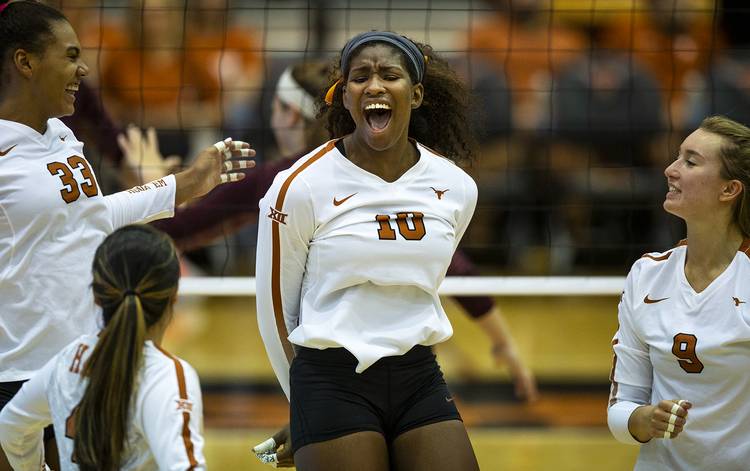 Micaya White and Brionne Butler each had double-digit kills as the fourth-ranked Texas volleyball team cruised to a sweep of West Virginia in Morgantown, W.Va., on Saturday.

The Longhorns finished the match with a .386 hitting percentage, a decided advantage over West Virginia’s .149. The visiting team hit .519 in the second set on the way to 18 kills.

Ashley Shook had 35 assists to go along with three blocks and four digs.

Texas played above the net well, making 10 team blocks on the day, led by Butler and Morgan Johnson, who each had five.

Sydney Petersen also contributed on defense as she led Texas with 13 digs. Butler, seemingly everywhere, also had six digs in the match.

The Mountaineers took an 11-7 lead in the third set before Texas rattled off a 5-1 run to tie the game at 12-all. West Virginia retook the lead at 16-14 before the Longhorns asserted dominance. Texas went on an 8-0 run to take full control of the set and close out the match.

The Texas volleyball squad will try to go 4-0 in the Big 12 when it travels to Fort Worth Wednesday. The Longhorns take on TCU in a nationally televised match starting at 8 p.m. on ESPNU.