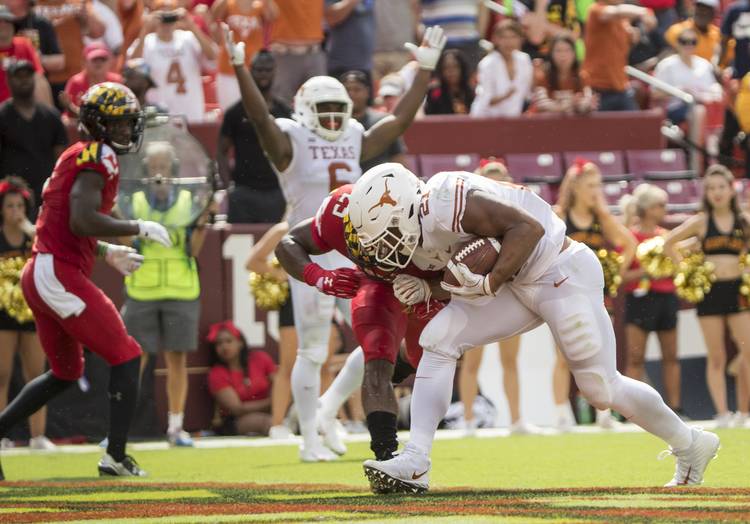 Texas running back Kyle Porter (21) runs into the end zone at FedEx Field in Landover, Md., on Sept. 1 , 2018. RICARDO B. BRAZZIELL / AMERICAN-STATESMAN

At his weekly press conference on Monday, Texas coach Tom Herman told reporters that junior running back Kyle Porter could redshirt this season.

Despite appearing in UT’s first four games, Porter did not travel with Texas for Saturday’s 19-14 win at Kansas State. Two days later, Herman said Porter is now deciding whether he will redshirt this season. A new NCAA rule permits eligible players to appear in four games before taking a redshirt.

According to Herman, Porter is still practicing with the Longhorns and is welcome on the team. Texas played Porter at key times in its season-opening loss to Maryland, but he has recorded only three catches, one kickoff return and rushing attempt this year.

Said Herman: “And if Kyle eventually decides he wants to play, Kyle is more than welcome on our team. Kyle’s still practicing with us every day to make sure that that opportunity is still a reality for him. And so we’ll see how and when he wants to make that decision, but we support him in everything that he does. He’s been nothing but a do-right guy in every facet of his life ever since we’ve been here. So we want to make sure we’re doing right by him, too.”

Mid-season redshirts and transfers could become a trend as athletes take advantage of the NCAA’s new rule.  In addition to letting freshmen get their feet wet, the rule also allows older players a chance to feel out their spot on the roster without sacrificing a year of eligibility. Last week, Clemson quarterback Kelly Bryant and Oklahoma State receiver Jalen McCleskey both transferred after playing in four games at their respective schools.

This past Thursday, Texas coach Tom Herman said conversations had been had with a couple of unnamed Longhorns about transfers. He didn’t have a problem with the NCAA’s rule, though.

“If this is the worst thing that comes of having that rule in place, I think anything that benefits the players is a step in the right direction,” Herman said last week. “You can look at it on the positive too. If a guy may have left in August, at least you got four games out of him.”

Porter was a state champion and four-star recruit when Texas signed him out of Katy High in 2016. He served as the back-up to D’Onta Foreman for much of the 2016 season. He then rushed 83 times for 261 yards and four touchdowns in 2017.

This fall, the 5-11, 215-pound Porter has been unable to emerge out of a crowded backfield that features seven scholarship running backs. The lone rush of Porter’s junior year has resulted in a two-yard touchdown.

Porter has averaged 3.6 yards per carry during his time at Texas.

Tom Herman: Texas-OU week is always fun, but it’s business as usual for No. 19 Longhorns