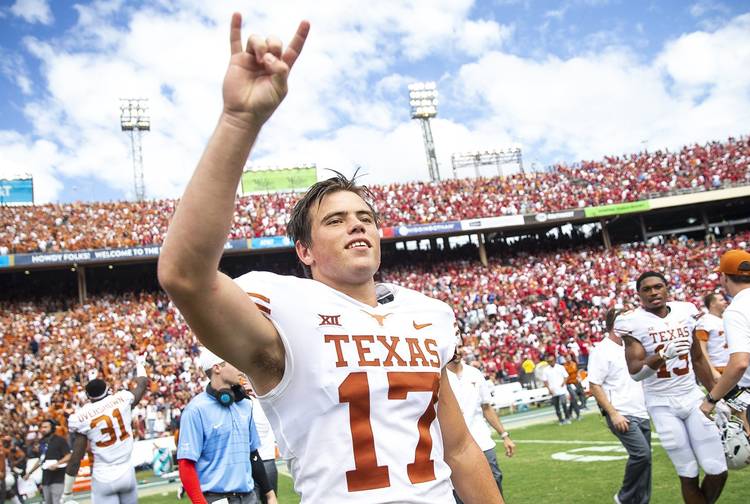 Texas kicker Cameron Dicker (17) holds up his horns after kicking the winning field goal in Texas' 48-45 win over Oklahoma at the Cotton Bowl in Dallas on Oct. 6, 2018. [NICK WAGNER/AMERICAN-STATESMAN]

On Saturday, Texas freshman Cameron Dicker lifted Texas to a 48-45 win over Oklahoma with a 40-yard field goal.

Before the 113th meeting between Texas and Oklahoma, the Red River Showdown had last gone down to the wire in 1996 when the Sooners ousted UT in overtime.  There were nine seconds left in regulation when “Dicker the Kicker” drove his attempt through the uprights while facing Oklahoma’s half of the Cotton Bowl.

Dicker has made seven of the 10 field goals he has attempted this season. He needs 10 more kicks to break Dusty Mangum’s record for UT freshmen. Here are a few more fun facts about Dicker, who graduated from nearby Lake Travis High:

1. There isn’t much to the story behind Dicker’s nickname. The word “kicker” rhymes with Dicker. Dicker says a few unnamed people have recently tried to take credit for the nickname, but it was likely a science teacher in middle school that first said it.

“It’s a cool thing. It works out,” Dicker said of the nickname.

2. Dicker spent part of his childhood in China, and he got into football when the fathers of the abroad Americans decided to start a team. The 6-1, 205-pound Dicker was originally an offensive lineman and back-up kicker. After the seventh grade, he decided to focus solely on kicking.

3. Dicker says he has never met Baker Mayfield, who graduated from Lake Travis High five years before the kicker. Mayfield, of course, was a well-known heel for the Longhorns who won the Heisman Trophy while starring at Oklahoma in 2017.

4. Holding for Dicker on Saturday was freshman Ryan Bujcevski, who is also the team’s punter. Freshman Justin Mader, a walk-on from Magnolia, was the deep snapper. Dicker said it didn’t take long for the three true freshmen to build a sense of chemistry. Said Dicker: “Having them there makes my job really easy.”

5. Dicker did not kick his first game-winner on Saturday. Last year, Dicker hit a 37-yard field goal with three seconds left in Lake Travis’ 34-31 win over Cibolo Steele. In Lake Travis’ 59-56 upending of Steele in 2016, Dicker beat Steele with a 29-yard make in the second overtime. Starring for those Steele teams was UT starting safety Caden Sterns, who joined Dicker in Texas’ 2018 recruiting class.