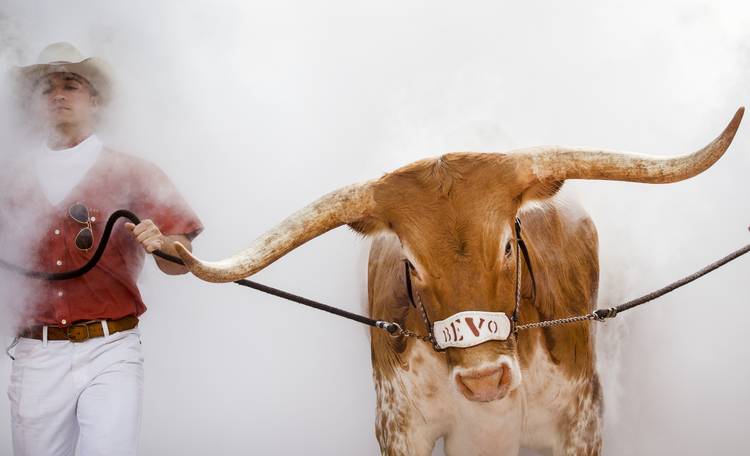 Bevo XV makes his entrance onto the field during an NCAA college football game at the Darrell K RoyalTexas Memorial Stadium in Austin, TX on Saturday, Oct. 13, 2018. [RICARDO B. BRAZZIELL/AMERICAN-STATESMAN]

Purdue’s blowout win over No. 2 Ohio State over the weekend shook up The Associated Press Top 25 poll and Texas was the beneficiary.

The Longhorns moved up one spot to sixth in the weekly poll that was updated Sunday. Texas has not been ranked this high since Sept. 12, 2010. The Horns started the 2010 season ranked fifth and slipped to sixth after a 2-0 start.

UT coach Tom Herman is expected to give an update on quarterback Sam Ehlinger’s injured throwing shoulder on Monday. He said last week the coaching staff typically does not do much game preparation during the off week.

It’s likely a firm decision on Ehlinger’s playing status will not be made until after Tuesday or Wednesday’s practice.