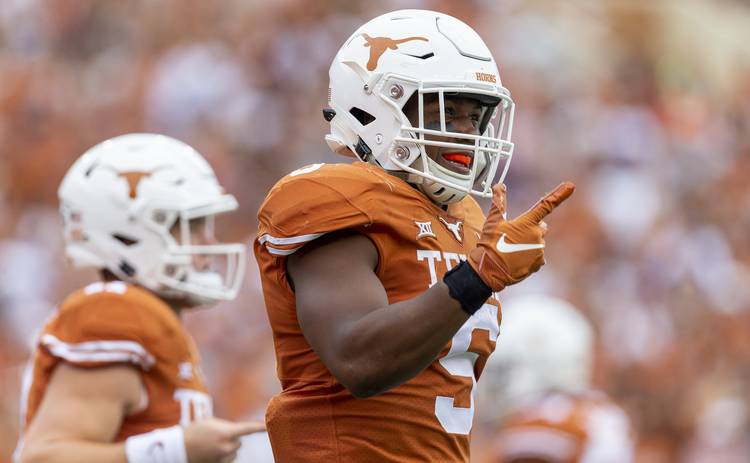 Texas running back Tre Watson (5) celebrates a touchdown against TCU at Royal-Memorial Stadium on Sept. 22, 2018. (Stephen Spillman / for American-Statesman)

In another reality, Tre Watson might have appeared on Texas’ scouting report for this week’s game at Texas Tech. The running back will instead be a part of the Longhorns’ game plan.

After spending the past four years at Cal, Watson is nine games into his Texas career. Before joining the Longhorns as a graduate transfer, Watson also considered an offer from Texas Tech.

Watson told reporters on Tuesday that he chose Texas for a handful of reasons. He thought he could develop as a running back under the tutelage of assistant coach Stan Drayton. He also wanted to study in UT’s social work program.

Watson took an unofficial visit to Lubbock, and he has a cousin that attends Texas Tech. Former Cal teammate Davis Webb played at Texas Tech, so Watson picked his brain during the recruiting process. In the end, though, Watson chose Texas over Texas Tech and LSU.

FIRST DOWN AND MORE.

Tre Watson runs it in for the @TexasFootball lead. pic.twitter.com/Z7fXBF9noS

The 5-11, 195-pound Watson has started seven times this season, and he is averaging 3.9 yards per carry. In last week’s 42-41 loss to West Virginia, Watson led UT with a season-high 80 rushing yards. He has rushed for three scores and his three touchdown catches rank third among the Longhorns.

“It’s nice having a two-punch duo that we can look to and rely on them,” said center Zach Shackelford of Watson and Keaontay Ingram. A freshman running back, Ingram run for 485 yards and two touchdowns in 2018.

Allowing 160.7 yards per game, Texas Tech’s run defense ranks 64th in the nation. No Longhorn topped 55 rushing yards in last season’s 27-23 loss to the Red Raiders. The previous two meetings between the two schools, however, were highlighted by Texas running backs D’Onta Foreman and Chris Warren III’s 341- and 276-yard performances.

Devin Duvernay has re-emerged as a deep threat for Texas, ‘but I feel like I can do everything’