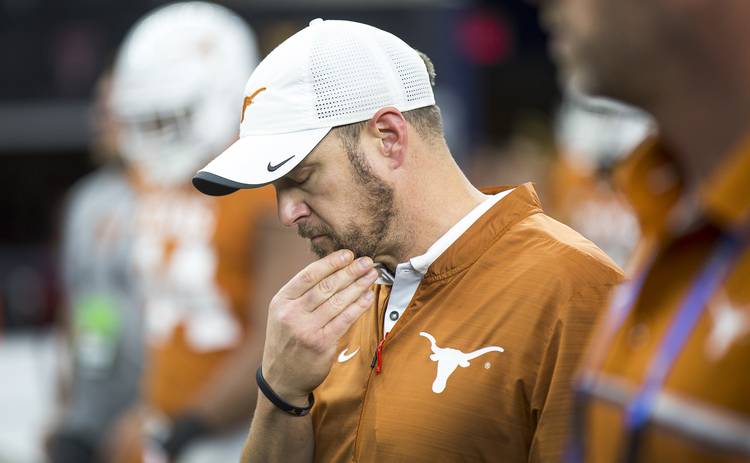 Oklahoma and its Heisman Trophy-candidate quarterback Kyler Murray proved too much for Texas in a 39-27 Big 12 championship victory. The Longhorns did cast some doubt into the Sooners with a fast start, and even had the game tied late in the third quarter.

On what went wrong for the offense in the second half:

“I don’t know. I would have to look at the film to tell you. I felt like we weren’t running the ball like we though we would be able to. That was certainly an issue. When you’re playing one-handed a little bit throwing the football there’s things that can happen. When their drives stalled, they were able to get field goals. When our drives stalled, we had to punt. It’s a matter of 10 or 15 yards.”

On what he learned about the Texas program this season:

On balancing disappointment of loss with progress made this season:

“It’s difficult. Losing is supposed to hurt. With a 1-0 mentality that we have, we don’t worry about the big picture. We went 0-1 today. Tomorrow it’s our job to wake up and try to go 1-0 in the bowl game.”

On whether Kyler Murray deserves to win the Heisman Trophy, Oklahoma deserves to be in College Football Playoff:

“I don’t get a vote in the Heisman so I haven’t been following other teams or players. I do know that he’s an elite player. He deserves all the credit in the world. … It would be unfair for me to comment on where (Oklahoma) stacks up in the country.”