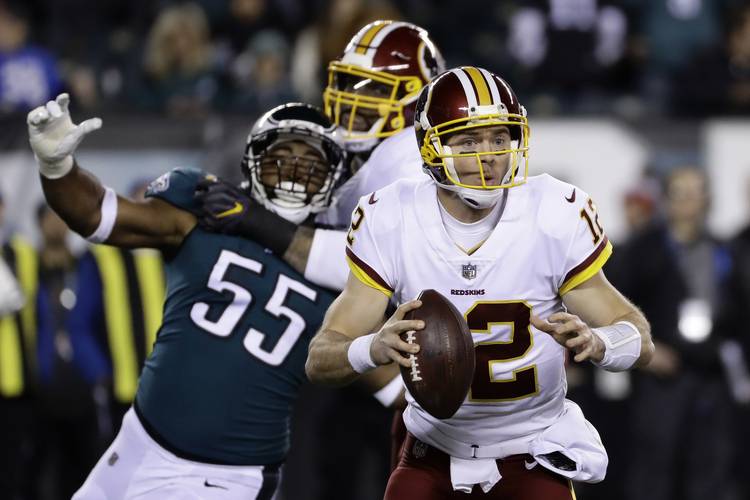 Washington Redskins quarterback Colt McCoy looks for a pass during the first half of an NFL football game against the Philadelphia Eagles, Monday, Dec. 3, 2018, in Philadelphia. (AP Photo/Michael Perez)

PHILADELPHIA — The Washington Redskins are accustomed to the knot in the stomach and the bad news that inevitably hits when a quarterback goes down: Colt McCoy is done for the year with a broken right leg, the same fate as his predecessor, Alex Smith.

Mark Sanchez now has his shot to morph from stay-at-home dad to stretch-drive starter.

“Your heart definitely breaks for them,” Sanchez said. “They’re great competitors and great people. You never want it under those circumstances.”

The Redskins have tasked Sanchez with keeping the Redskins afloat in the NFC playoff picture after McCoy suffered a fractured fibula in his right leg in the first half of their 28-13 loss to the Philadelphia Eagles on Monday night.

McCoy ran to avoid a sack and tried to slide as the Eagles defense rushed toward him. McCoy’ planted his right leg into the turf and the lower part of the leg and ankle viciously whipped into safety Malcolm Jenkins’ knee.

The Redskins know a thing or two about serious injuries to quarterbacks McCoy got his chance because Smith suffered a broken right leg just weeks ago that has threatened his career.

“We have to get a plan ready for Mark moving forward,” coach Jay Gruden said. “We’ve got to play great football around him which we didn’t do tonight.”

McCoy stayed in the game and completed two short passes before limping off with the Redskins trailing 7-3 to the Super Bowl champion Eagles (6-6). He made his second straight start since Smith was knocked out with a gruesome season-ending leg injury last month against Houston. McCoy helped Washington score a pair of TDs, including a 9-yard TD pass on the backup’s first pass in a regular-season game since 2015.

His start in the Thanksgiving game against Dallas was his first since 2014 and he won’t get another one this year. McCoy, who started for Cleveland and San Francisco earlier in his career, had appeared in nine games over the last three-plus seasons with Washington, until Smith was injured.

Sanchez was the lone QB left on Washington’s roster and finished 13 of 21 for 100 yards. He was sacked twice and threw an interception in the fourth with the Redskins trailing 22-13 that snuffed a rally. Sanchez, signed two weeks ago, played for the first time since Jan. 1, 2017, when he was with Dallas.

“I was at home with my son who just turned two, who better be in bed, just praying for this opportunity,” Sanchez said.

“It’s been tough, but the one thing I like is how our guys respond,” Peterson said.

Sanchez was once the franchise quarterback for the New York Jets and led them to the AFC championship game his first two seasons in the NFL. Sanchez was the fifth overall pick in the 2009 draft and drew comparisons to Joe Namath in New York. He was 4-2 in the postseason and helped the Jets beat Peyton Manning and Tom Brady in consecutive road playoff games in January 2011. But Sanchez had an NFL-leading 52 turnovers in 2012-13 and lost his starting job to Geno Smith. He spent two seasons with the Eagles and one with the Cowboys.

The lasting image of his time with the Jets came in 2012, when he fumbled after running into the backside of guard Brandon Moore. It was returned for a touchdown by New England’s Steve Gregory in front of a national television audience on Thanksgiving night and was infamously labeled “The Butt Fumble.”

Sanchez lost a fumble against the Eagles and actually saved the ball by pressing it against his rear end.

Sanchez was the pick to sign over Kellen Clemens, Josh Johnson, T.J. Yates and EJ Manuel because of his experience and success in the NFL. All five worked out at the team’s facility after Smith was injured, and quality veteran QBs are in low supply.

Of course, former 49ers star Colin Kaepernick is still home unsigned and waiting for a resolution on his grievance against the league. There was an outcry of support on social media for the Redskins to at least bring in Kaepernick for a tryout.

“Mark Sanchez is playing QB on Monday Night Football and (at)Kaepernick7 is sitting at home. Think about that,” disgraced cyclist Lance Armstrong tweeted.

The Redskins could use a QB and PR boost after they claimed linebacker Reuben Foster off waivers after he was released by the San Francisco 49ers following a domestic violence arrest. He remains on the commissioner’s exempt list and is facing league suspension.