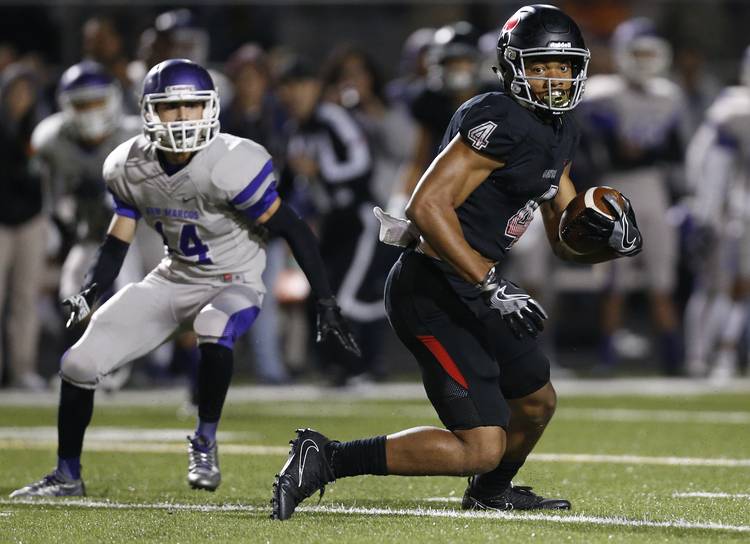 Austin Bowie wide receiver Elijah Higgins picked his college destination the day before the early signing period when the four-star picked Stanford over Texas and Florida on Tuesday night. The big-bodied 6-foot-3 wide receiver earned second-team all-district as a senior despite missing half of the season with a wrist injury.

Higgins was a first-team selection as a sophomore and junior. He participated in The Opening Finals and will play in the Polynesian Bowl before finishing his prep career. Higgins is the No. 24-ranked prospect on the latest 2019 Fabulous 55. He held 38 offers and posted a laser-timed 4.57 40-yard dash at The Opening at 214 pounds.

“Stanford is a ridiculous mix of top football and academics,” Higgins said. “It’s the whole aroma of the program.”

Higgins is the second local wide receiver the Longhorns came in second place for in the 2019 cycle. Lake Travis star Garrett Wilson chose Ohio State over the Longhorns in April. Higgins is a native of Florida and always maintained leaving the state was not a concern.

Ranked as the No. 97th-best prospect in the nation by 247Sports Composite, Higgins becomes the top-rated member of Stanford’s current 2019 class. Crandall center Branson Bragg is a fellow Fab 55 member also committed to Stanford.

Texas added a third wide receiver to its 2019 class Tuesday afternoon when three-star Kennedy Lewis pledged to Tom Herman’s program. The 6-foot-3 product of Melissa High School north of Dallas joined four-star slot receivers Jordan Whittington and Jake Smith. The Longhorns are still in pursuit of five-star athlete Bru McCoy, who picks a college on Jan. 5 at the All-American Game in San Antonio.