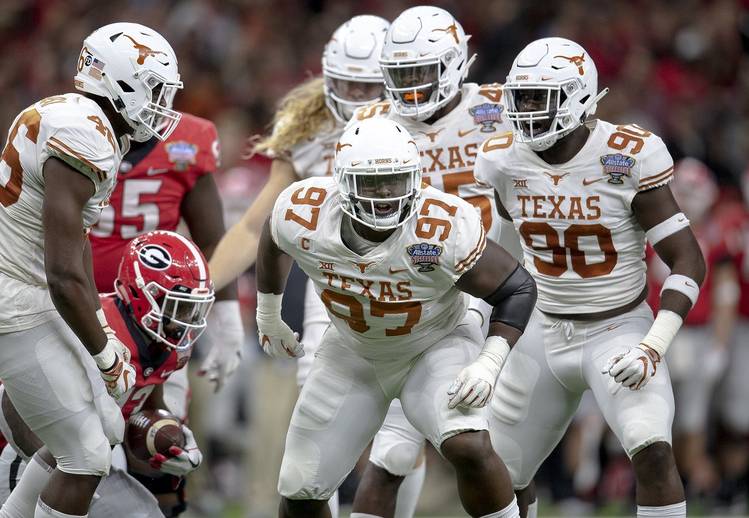 It’s all over at the Superdome in New Orleans. Fifteenth-ranked Texas, which was a two-touchdown underdog to No. 5 Georgia, has won the Sugar Bowl in impression fashion, 28-21.

It’s easy to point to the pre-game mascot vs. mascot incident of Bevo’s near goring of Uga, as if that set the tone for what was to come. And in a way, it did. But the Longhorns, not their longhorn, won this one outright. They were the far more physical team, weren’t flashy offensively but definitely were confident and efficient, and took advantage of Georgia mistakes.

Texas started hot and Georgia started cold. The Longhorns controlled the first half, held things in place in a scoreless third quarter, and then sealed it in the fourth by moving the ball and keeping drives alive. Kirby Smart used up all his timeouts with 4:20 left in the game and couldn’t make stops; it was a 7-point difference at the end, but Texas never trailed.

It’s the biggest bowl game for Texas since the BCS championship game loss to Alabama 10 years ago. It came after an exciting Rose Bowl finish and was a prime-time chance to punctuate a remarkably solid season in Tom Herman’s second year.

Ehlinger was special, looking like the confident, play-making quarterback of October, before the shoulder injury. It was the Longhorns, not the Bulldogs, who ran it more effectively. And it was an inspired night from the Texas defense, which stuffed Georgia’s running game, produced two turnovers and carried the Big 12 banner well. Take that, SEC.

Maybe the Bulldogs didn’t have their hearts in this one, the CFP hangover from not making the playoff field too much to bounce back from. Maybe not having Deandre Baker — their defensive leader — was a factor. But the Bulldogs were outmuscled all night and made way too many blunders, from two punting game miscues, a lost fumble deep in Georgia territory and an interception. And it wasn’t like Ehlinger burned the secondary with Baker not there. He did his most damage with his legs, converting first downs, keeping drives alive.

How it all played out

1. What a night for B.J. Foster. Playing for the injured Caden Sterns, the freshman had a huge night, forcing two fumbles, breaking up what would’ve been a big gainer downfield and walloping Jake Fromm on a fourth-quarter blitz. He hobbled off the field at the end of the first half but was back on the field for the second.

2. P.J. Locke III, playing in his final game, picked off Fromm on Georgia’s opening drive of the second half, which was looking promising. It was Locke’s third interception of his career. And the biggest.

3. Collin Johnson — playing in his final game, too? — didn’t have a catch in the first half and nearly went three quarters without one, but his first grab was a big one: A 50-50 pass that went for 35 yards down to Georgia’s 22-yard line with 1:15 left in the quarter. His second catch was big, too. It was on the two-point conversion that put Texas up by three touchdowns with 11:49 to go. He finished with three catches for 40 yards.

5. The Bulldogs had just 118 yards of offense in the first half. That included just 29 yards rushing.

6. Should Texas have gone for it on fourth-and-2 at its own 47, on the Longhorns’ first drive of the third quarter and leading 20-7? It was coming off Locke’s interception to open the second half, and had the Horns converted and then gone on to complete the drive with a touchdown, you’re talking about a 27-7 lead with half of the third quarter gone.

As it turned out, Tom Herman went for the punt. It was downed at Georgia’s 15-yard line. The Bulldogs ended up punting.

7. Speaking of going for it, Herman did go for it on fourth-and-goal from inside the 1 early in the fourth, which Ehlinger just barely converted for the touchdown. And then the Texas coach followed that up with a successful two-point conversion to make it a three-touchdown game, 28-7.

9. Ryan Bujcevski’s numbers were a far cry from his cousin Michael Dickson’s in last year’s Texas Bowl, but the freshman from Australia was effective. He had a long kick of 52 yards and had three others go only 33, 38 and 86 yards but they were fair catches at Georgia’s 10, 15 and 10.

10. Conversely, it was a bad night for the other freshman punter. The first two efforts for Georgia’s Jake Camarda were disastrous. His first punt went 52 yards, but a replay showed that his knee touched the turf as he went low for the snap; it set Texas up at Georgia’s 27-yard line. And Camarda’s second punt was an 11-yard shank.

For Texas: Ehlinger was 19 of 27 for 169 yards and he rushed for 64 yards and three touchdowns. Tre Watson, playing in his final game, rushed for 91 yards on 18 carries and averaged 5.1 yards per tote. Lil’Jordan Humphrey led all players with seven catches for 67 yards.

For Georgia: Fromm was 20 of 34 for 212 yards, three touchdowns and one interception. Elijah Holyfield rushed for 62 yards and D’Andre Swift had only 17. Riley Ridley had five catches for 61 yards.