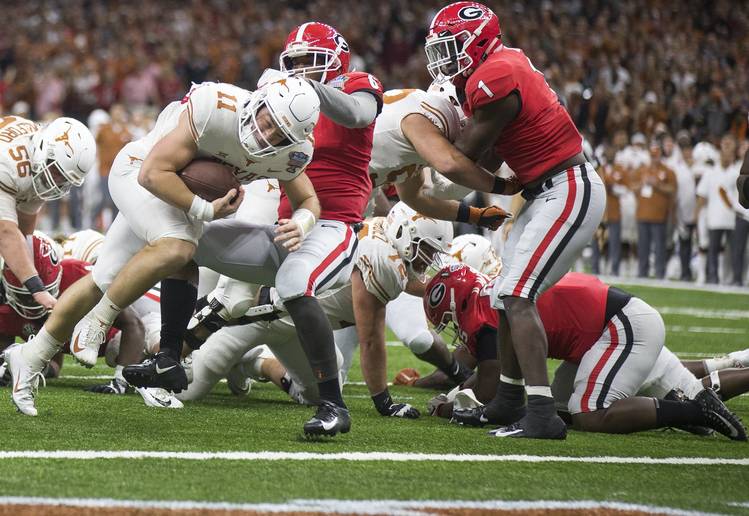 Texas quarterback Sam Ehlinger (11) runs into the end zone for a score in the first quarter of the game against Georgia defense during the Sugar Bowl NCAA college football game in New Orleans, LA.Tuesday, January 1, 2019. [RICARDO B. BRAZZIELL/AMERICAN-STATESMAN]

It’s halftime at the Superdome in New Orleans. No. 15 Texas, which is a two-touchdown underdog tonight, is controlling No. 5 Georgia. The Longhorns lead 20-7.

Maybe the Bulldogs came in deflated, having been excluded from the CFP semifinal field after taking Alabama to the brink in the SEC title game. They surely looked flat in the first quarter, managing only 8 total yards on three drives. Sam Ehlinger looks like the Ehlinger of October, the one before the shoulder injury. The defense is playing inspired and all the breaks are going Texas’ way and all the mistakes have been Georgia’s.

The Bulldogs have just 118 yards of offense so far.

1. Well, if you haven’t heard by now about the pre-game altercation between the two live mascots, know this: Bevo nearly gored Uga before handlers on both sides averted disaster.

2. As first impressions go, things started out great for Texas. The Horns zipped through their opening drive (10 plays, 75 yards, 4:25 off the clock) and then forced Georgia to punt on their first drive — a punt that turned into a nightmare for the Bulldogs; freshman punter Jake Camarda’s knee touched the turf as he bent low for the snap, and a replay awarded Texas the ball at Georgia’s 27. It wiped out what was a big 53-yard punt that was downed inside the Texas 10.

3. Not a good night for Camarda. After the knee-on-the-turf blunder on his first punt, his second effort was an 11-yard shank.

4. Caden Sterns isn’t playing. Fellow freshman B.J. Foster started for him. In the first quarter, Foster forced a fumble that Texas converted for a touchdown and also pressured Jake Fromm into a third-down throwaway. He forced another fumble in the second quarter.

6. Texas showed some yips on Georgia’s final drive of the half. Gary Johnson could’ve pounced on a Georgia fumble but instead tried to scoop it up and return it. He couldn’t control it and the Bulldogs retained possession. On the very next play, Davante Davis couldn’t complete a tackle on Riley Ridley, and the receiver rambled for a 24-yard gain. But as the Bulldogs entered field goal range, Anthony Wheeler sacked Fromm on third down for a 9-yard loss. The Bulldogs punted.

Stats that matter: Ehlinger is 10 of 13 for 90 yards, and has two rushing touchdowns; Tre Watson has rushed for 50 yards on nine carries and is averaging 5.6 yards per carry. Lil’Jordan Humphrey has four catches for 39 yards. Collin Johnson doesn’t have a catch yet. Fromm is 9 of 15 for 89 yards. The Bulldogs have rushed for only 29 yards and are averaging 1.5 yards per carry. Ridley has four catches for 55 yards.

Georgia will get the ball to start the second half.