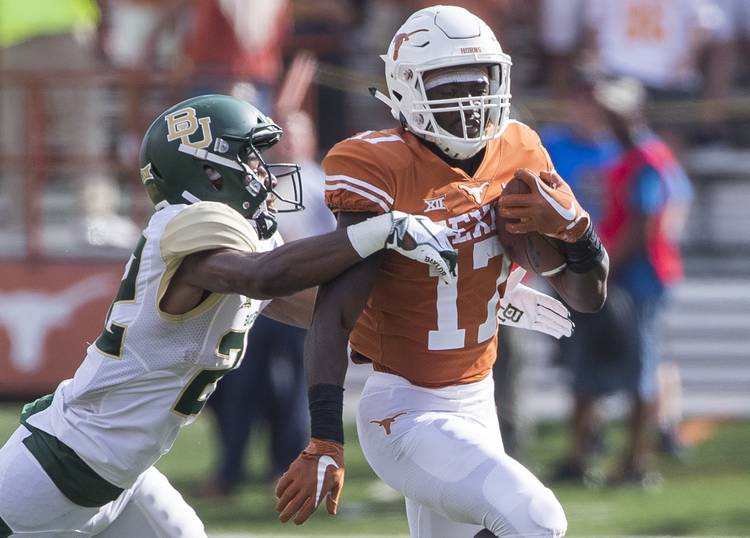 Texas junior Lil’Jordan Humphrey announced on Tuesday that he will enter the NFL Draft. He will attempt to become the first UT receiver drafted since Marquise Goodwin was a third-round pick in 2013.

While Humphrey is chasing history and his professional aspirations, Texas needs to find his replacement. Humphrey started 10 times during the 2018 season as UT’s slot (or “H”) receiver. He led the Longhorns in receptions (86), receiving yards (1,176) and touchdown catches (nine) while also rushing for a touchdown and throwing a scoring pass.

In addition to Humphrey, Texas is also losing Jerrod Heard to graduation. So, some blanks need to be filled in when it comes to the “H” position on UT’s depth chart.  With 13 scholarship-holding receivers on its projected 2019 roster, Texas has some intriguing options for the role of “H” receiver:

What does Texas coach Tom Herman want out of a slot receiver? When asked last spring, Herman said that “I think ideally, you would like a guy that can motion in the backfield and do some things out of the backfield, mainly on some speed sweep-type things but also be able to hand the ball off on other things. You’d like a guy that is quick and fast enough to make plays in space in the RPO (run-pass option) game, on bubbles and quick-hitters, if you will.”

Herman, though, has also stressed the importance of versatility and his desire to simply play his best players. The 6-4, 225-pound Humphrey, after all, wasn’t the size of a typical slot receiver. That philosophy also explains why Humphrey replaced an injured Collin Johnson as the “X” receiver for a game at Texas Tech that featured Heard, the back-up “Z” receiver, running primarily out of the slot.

If Texas simply wants its best receivers on the field, that could open up the possibility of a veteran outside receiver like John Burt or Devin Duvernay sliding into the slot. Recruiting a graduate transfer could provide UT with another stop-gap solution.