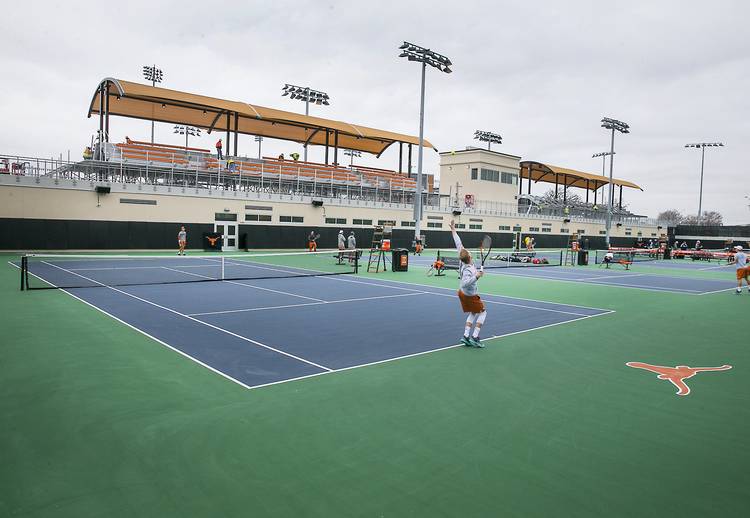 The Longhorns opened the day with a 6-1 win over UTSA and followed with a 4-0 sweep over Texas A&M-Corpus Christi.

Texas won all three doubles contests against UTSA to take the doubles point in the first match. Christian Sigsgaard and Harrison Scott won 6-3 before Nevin Arimilli and Johnny Goodwin clinched the point with a 6-2 win. Chih Chi Huang and Yuya Ito finished out their match, taking a 6-4 win.

Colin Markes made it 2-0 with a singles win over Javier Gonzalez. Gonzalez retired after Markes won the first set 6-4.

Christian Sigsgaard clinches the team win for Texas over UTSA, 6-3, 6-1 over No. 66 Kai Breitbach! #HookEm🤘🎾 pic.twitter.com/wDPWBHjEiB

After the Roadrunners took their only win of the day, Rodrigo Banzer and Huang each won their matches to close out the competition.

The Longhorns improved to 6-0 in dual-match competition after sweeping Texas A&M-Corpus Christi later in the day. Instead of finishing out every match, the teams played until one squad clinched the competition.

And that makes two! Texas sweeps Texas A&M-Corpus Christi, 4-0, and finishes off a doubleheader sweep after defeating UTSA, 6-1, earlier in the day! The Longhorns are now 6-0 in dual match play this season! #HookEm🤘🎾 pic.twitter.com/8nVoMo06TD

Arimilli and Goodwin won 6-3 before Markes and Leonardo Telles clinched the doubles point with a 6-2 win.

Johnny Goodwin rips another ace on a match point, Texas' third of the day! He beat Kyohei Yamanaka of TAMU-CC, 6-0, 6-1! #HookEm🤘🎾 pic.twitter.com/nuf7Qd4bI1

Scott won 6-1, 6-2 over Carlos Pedrosa to pull the Longhorns to within a win of clinching the match.

Banzer closed out the competition with a 6-3, 6-1 victory over Okkie Kellerman.

The Longhorns next face North Carolina at 1 p.m. Saturday at the Weller Indoor Tennis Center.