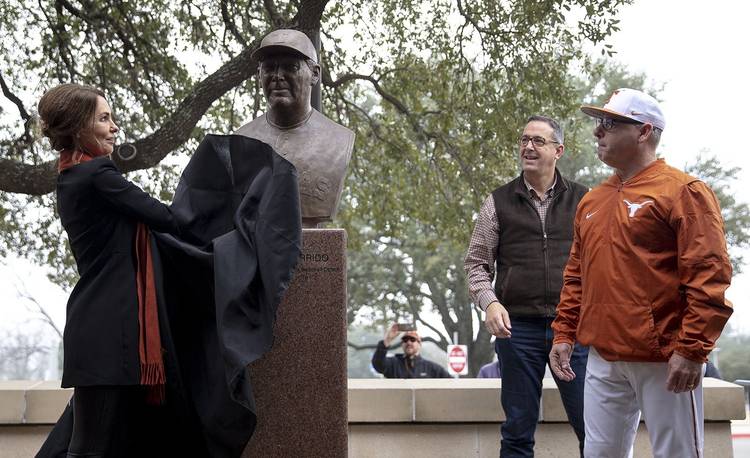 Texas honored Garrido ahead of its annual alumni game. During a short ceremony, Texas unveiled a bust of the longtime baseball coach. Garrido is the fourth head coach to receive such an honor, joining Bibb Falk, Billy Disch and Cliff Gustafson.

“I speak on behalf of all the players who got to play for him or (got) to know him as a friend, it’s an honor to be here for that,” said Blue Jays prospect Kacy Clemens, who played for Garrido from 2014-16. “I thought the bust looked awesome. It’s a great honor for him to be out there outside of the Disch forever. I’m going to touch it for good luck when I leave, that’s for sure.”
Advertisement

Garrido passed away last March at the age of 79. From 1997-2016, he led Texas to two national championships and became college baseball’s all-time winningest coach. Garrido recorded 824 of his career’s 1,975 wins with the Longhorns, but former pitcher Parker French said he also guided his players to plenty of life lessons.

French described Saturday’s ceremony as “emotional.” The festivities were attended by Garrido’s friends, family and former players as well as a handful of the university’s dignitaries. Garrido’s widow, Jeannie, removed the sheet to reveal the bust.

“I think it was just a reminder of the impact that Coach had on so many people’s lives,” said French, a pitcher at UT from 2012-15 who now plays in the Colorado Rockies’ farm system. “He was way more than a baseball coach. He taught us about life and he was able to compare baseball to life and make us better men. Just realizing that today through the speakers struck an emotional chord.”