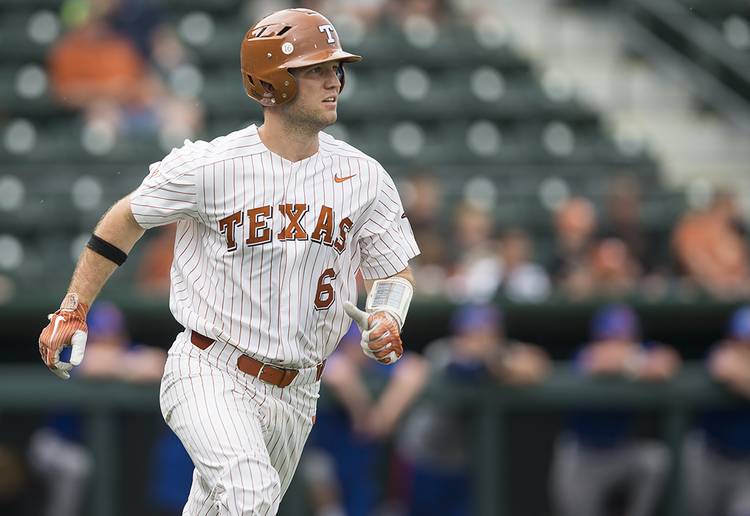 HOUSTON — The 23rd-ranked team in D1Baseball’s national poll, Texas improved its record to 3-1 with a seven-run win over Rice on Tuesday night.

Rice struck first at Reckling Park with an unearned run in the second inning, but UT responded with five runs in the following frame. In the third inning, Eric Kennedy and DJ Petrinsky drove in three runs with hits that eluded the gloves of diving Owls in the outfield. Petrinsky’s two-run triple then turned into a free trip home when Rice threw away the relay throw.

After hitting .269 over its first three games at the University of Louisiana at Lafayette, Texas collected 13 hits on Tuesday. Designated hitter Zach Zubia, who hit his first home run of the season, and Petrinsky each contributed three RBIs. Kennedy scored three times.

Against Rice, Texas started five Houston-area products. Two of those local talents went to Cypress Ranch High. Freshman pitcher Ty Madden struck out four batters in the first start of his collegiate career, but he was pulled after loading the bases with two outs in the third inning. Senior Masen Hibbeler, who won a state title with the Mustangs in 2015, started at second base and went 0-for-5.

NOTABLE NUMBER: 12. David Pierce, who is four games into his eighth season as a head coach, has now coached 12 times against Rice.  He is 8-4 against a Rice team that dealt him a loss in his 2017 debut at Texas. Pierce spent 10 seasons as an assistant coach at Rice, and the Owls won the 2003 national championship during one of his years on Wayne Graham’s coaching staff.

UP NEXT:  Texas will return home on Friday to open a four-game series against Purdue. After opening this season with four road contests, Texas has 10 straight dates at UFCU Disch-Falk Field on its schedule. A qualifier for the NCAA tournament in 2018, Purdue (0-3) was swept over the season’s first weekend by Southern Miss.