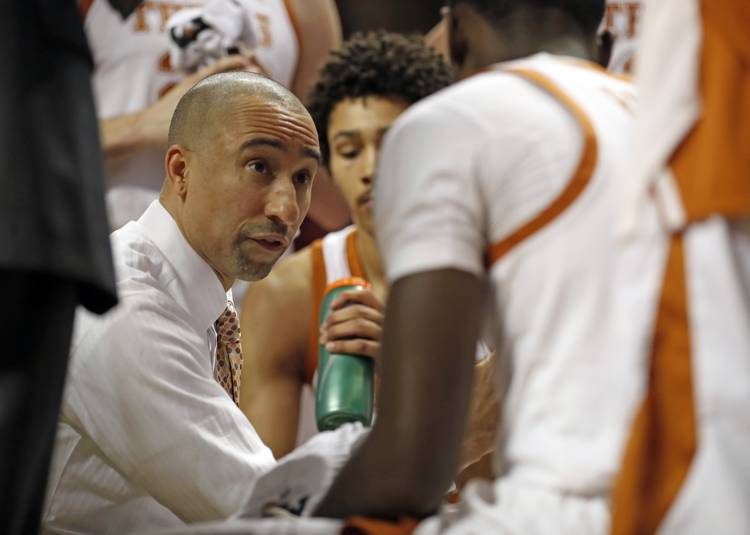 That’s about the only takeaway for both teams’ fan bases after the eighth-ranked Red Raiders cruised to a 70-51 victory on Monday at United Supermarkets Arena.

Tech (25-5, 13-4 Big 12) can capture at least a share of the league title in its regular season finale later this week. Kansas State is also tied for first place with one game remaining.

Meanwhile, the Longhorns (16-14, 8-9) will shuffle back home after shooting 29.6 percent and looking overmatched against a defense ranked No. 1 nationally in adjusted defensive efficiency, according to Kenpom.com.

Texas coach Shaka Smart is now 0-4 in four trips to Lubbock with the Longhorns.

Tech had four players finish in double figures on senior night. Texas guard Matt Coleman III led the way for the Horns with 16 points. Jase Febres, who had hit at least five 3-pointers in the last three games, went 1-for-10 from the floor and 0-for-5 from long range.

Coleman and Elijah Mitrou-Long were given plenty of open looks, and they kept firing away. Only problem was not many of them went in. Coleman was 6-for-15 from the floor and took only four 3-pointers. Mitrou-Long followed a similar path of trying to get inside. He went 3-for-13 from the floor, which included going 2-for-5 from 3-point range, and finished with 11 points. Otherwise, there just wasn’t much offense to speak of for the visitors. Dylan Osetkowski had seven points and Jaxson Hayes had six points.

It was rather stunning to hear ESPN’s resident bracketologist Joe Lunardi say on the broadcast that Texas was already “in” in the NCAA Tournament. If the Longhorns lose the regular-season finale, they would be only one game above .500 going into the Big 12 tournament. That’s typically not remotely close to NCAA worthy. Lunardi said the Horns would likely be a No. 9 seed in the tournament.

Still, the Horns will take some positivity anywhere they can get it as far as the postseason is concerned.

Sometimes, it’s just not your night. Febres had one of his 3-point shots blocked by Jarrett Culver. Febres corralled the loose ball, made a move and got near the paint. His next shot on the same possession was blocked by Norense Odiase. Tech ball. At least the Horns made a conscious effort to get the ball inside after halftime. But they were 5-for-19 after 13 minutes into the second half and trailed by 17 points.

More than 15 minutes into the game, the reigning Big 12 player of the week did not attempt a single 3-point shot. Some of Febres’ inactivity was due to Tech’s stellar defense. The Raiders switched on some screens but not all. Complicating matters, the Horns were missing from point-blank range.

After Texas missed nine straight shots in a row, Smart called timeout with 7:06 left in the first half. At that point, Texas was 3-for-19 for the game and trailed 15-9. The Horns closed with three buckets on their final three possessions, and it was a nine-point game at halftime.

Texas returns home for the regular-season finale at 11 a.m. Saturday against TCU. It’ll be senior night, although it’s still unclear whether suspended senior guard Kerwin Roach II will be reinstated to play. The Big 12 tournament runs March 13-16 at Sprint Center in Kansas City.